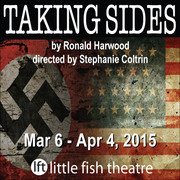 Riveting life and death drama in the social minefield of post-Nazi Germany.

In Berlin, Germany, 1946, a US Officer investigating individuals and their ties with the Nazi party becomes obsessed with proving the guilt of a world famous conductor, Wilhelm Furtwängler. As the terrors of Nazism spread, many of Furtwängler's colleagues fled the country, whether out of protest or persecution, but Furtwängler mysteriously chose to stay. Did he stay to do as much good as possible in the face of evil, as so many believe, or did he stay to serve Hitler, of which he was later accused?  "A brave, wise and deeply moving play.” – LONDON SUNDAY TIMES