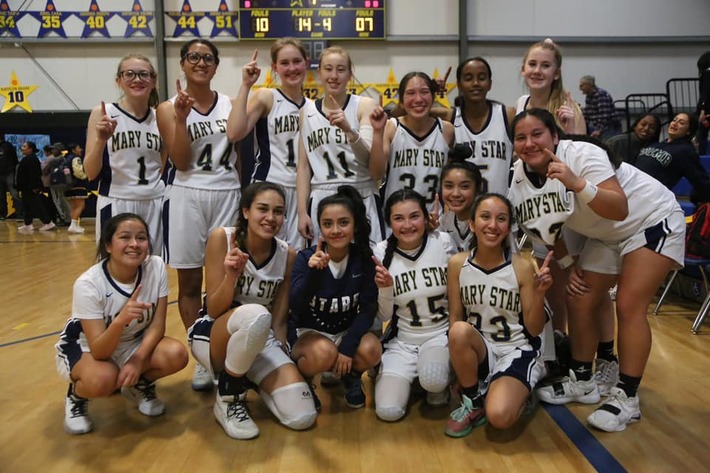 Tuesday, February 4, 2020 will forever be the day that the Mary Star High girls basketball ended a near four-decade long wait of becoming a league champion.

Seven years ago, the Stars went 1-16 in the 2012-2013 before Victor Tuberosi took over the coaching job, completely changing the culture from a place every opposing school saw as an easy win, to a place that's now regarded as one of the hardest to win a game on the road.

Mary Star would convincingly win 65-32 over visiting St. Bernard of Playa Del Rey to clinch a guaranteed share of the Santa Fe League championship, its first league crown of any kind since the 1983-1984 season. Yes, it was that long of a wait for the Stars, who are more than glad that they finally put an end to the torture of falling short in league play time and time again.

"This is an amazing badge of honor that we'll all be able to carry on for the rest of our lives," Mary Star junior guard Isabella Serrano said. "We will look back and say that we did this together as a unit and family."

Even though the Stars were unable to clinch the league crown outright two nights later in a 47-33 road defeat at rival St. Pius X/St. Matthias Academy of Downey, who shares the league crown along with St. Genevieve in a three-way tie for first place, nothing could take the joy away from what they've accomplished.

The entire regular season has been one of the best in recent memory for Mary Star, as they finished second place in the Downey Calvary Chapel Tournament, won the St. Monica Tournament, and finished fourth in the post-Christmas Savanna Tournament, before going undefeated at home in Santa Fe League play, with the main focal point being their tenacious defense, which definitely played a pivotal role in the league opener on January 9, when the Stars smothered defending outright league champion St. Genevieve in a 31-11 victory at home.

"It was important for us to win that game," Mary Star junior guard Kaitlyn Oasay said. "Especially since (St. Genevieve) beat us on our home court last year. We were determined to not let that happen again."

January 21 saw Mary Star carry that same mindset when St. Pius X/St. Matthias visited the Taper Avenue campus as the Stars broke the game open with a 16-0 run to close the third quarter, eventually propelling them to a 42-32 victory over the Warriors.
"We gave it our all, played as a team, and nothing stopped us," said Mary Star freshman guard Bella Marconi, who set the tone early against the Warriors with two first-quarter three-pointers.

Finally in the victory over St. Bernard, Mary Star buried a season-high seven three-pointers and scored a team-high in points, with Serrano leading the charge with a season-high 21 points, including three triples. Yet that whole game will forever be remembered by a fearless drive to the basket for a reverse layup by senior forward Sarah Leyba.

Taking a missed shot by the Vikings for a rebound, Leyba drove the length of the floor, went underneath the basket for a left-handed layup, got inadvertently smacked in the face as the shot went up which dropped Leyba on her back, and the shot harmlessly fell off the glass and in the hoop, drawing a loud roar of appreciation from the Stars' fans who celebrated Leyba and the other four seniors on senior night.

Once the final buzzer sounded, the team posed for a team photo with the scoreboard flashing the final score in the background after singing a spirited rendition of the school's alma mater that followed the postgame handshake.

It was truly an indescribable feeling on all of the Stars, especially senior forward Jenna Miloe.

"(Winning league) felt like a dream come true," Miloe said. "It is an honor to be on the team that brought the league championship title back to our school after over three decades. I hope we inspired future players coming in to do the same."

Even though the regular season is already memorable, the Stars would love nothing more than to either duplicate or surpass what they did in the postseason a year ago, when they reached both the CIF-Southern Section Division 5-AA semifinals, and the quarterfinals of the CIF Southern California Division 5 Regional playoffs.

Mary Star (18-9 overall, 6-2 league) has earned a first round home game in the CIF-SS Division 4-A playoffs which begins Thursday, where the Stars will host Sacred Heart Of Jesus (Los Angeles), 7 pm at Mary Star High.

"We all just need to work super hard," Marconi said. "I know this team will never give up, so be ready for us."