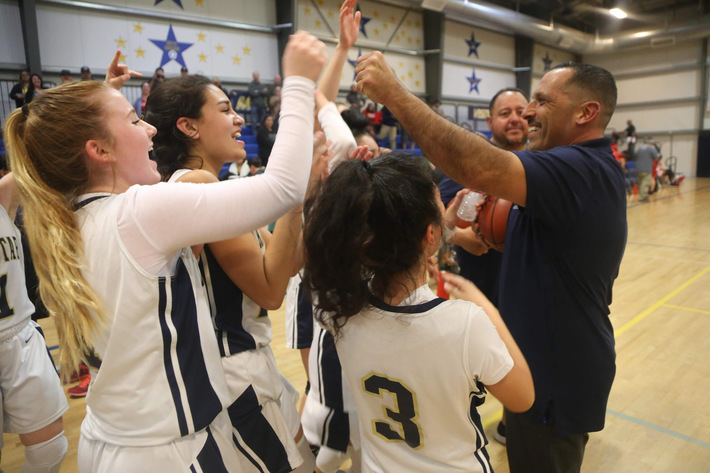 In the 2012-2013 season, the Stars only won once in their 16 games, but ever since coach Victor Tuberosi took over the program the next year, opposing schools are way past looking on their schedules pointing to where Mary Star is on it and circle that day as a guaranteed victory.

Those days are long gone now.

On Tuesday, the Stars would get Tuberosi his 100th career coaching victory, while taking over sole possession of first place in the Santa Fe League in the process with a 42-32 victory over visiting St. Pius X/St. Matthias of Downey.

"I am so happy that I was a part of the team that got this accomplishment for coach Vic," Mary Star senior forward Jenna Miloe said. "He is a very special person not only to the team, but to the community as a whole. He deserves this milestone, and it is extremely special because of the team we beat to get there."

The entire first half was a struggle, but Mary Star (13-7 overall, 3-0 league) started off strong with consecutive three-pointers by freshman guard Bella Marconi, followed by buckets from senior forward Sarah Leyba and junior guard Isabella Serrano to give the Stars an early 10-4 lead, before the Warriors (14-9, 3-1) went on a 7-2 run to end the first quarter only trailing 12-11 when senior forward Crystal Menjivar hit a top-of-the-key jumper at the buzzer.

Once the third quarter started, St. Pius X/St. Matthias senior forward Lauren Cabrera began to take charge, as she scored all eight of the Warriors' points to give them a 23-19 lead with 4:26 remaining, but once Serrano buried a corner three-pointer 22 seconds later, it would ignite a game-breaking 16-0 run by the Stars to close the quarter with a 35-23 advantage when the quarter drew to a close.

Leyba was the main catalyst of that run, following up Serrano's triple with back-to-back 'And-1' layups to push Mary Star ahead for good at 26-23.

"I knew we needed to put this game out of reach so I took matters into my own hands," said Leyba, who finished with 12 points, eight rebounds and three steals for Mary Star. "My teammates set me up for success."

The run further escalated after Leyba's momentum-shifting buckets, as Serrano got a steal and layup. After Miloe drew an offensive foul on the Warriors' sophomore center Nicole Okoli, Leyba hit a mid-range jumper from just inside the free-throw line, then junior guard Kaitlyn Oasay drove for consecutive layups in the half court set triggered by screens from Leyba. A free throw with 21.4 seconds left from junior guard Cristina Camacho ended the Stars' scoring surge.

"It was important to keep our ferocious defensive alive, but also to be smart and poised on offense," said Oasay, who had three steals. "The overall team heart was there, but it took for us believing in ourselves to win this game. We trusted each other like never before."

St. Pius X/St. Matthias started off the fourth quarter with a 7-0 run of their own which ended when senior guard Michelle Reynoso hit the Warriors' only three-pointer of the game to cut Mary Star's lead to 35-30 with 5:48 to play, but that was as close as they would get for the remainder of the contest as the Stars would outscore the Warriors 7-2 the rest of the way to secure the victory.

Serrano led Mary Star with 14 points, while Marconi finished with 8 points. Cabrera led St. Pius X/St. Matthias with a double-double of 16 points and 12 rebounds, while Reynoso and Okoli each scored five for the Warriors.

Even though the Stars are now in a good position to try and capture their first league title in girls basketball since the 1983-1984 season, they know their work is far from over knowing they will visit St. Pius X/St. Matthias in the rematch on February 6. Still, getting that first battle out of the way victorious had to feel good for the Stars after being swept by the Warriors last season in a pair of hard-luck defeats.

"It was really tough for us last year," Mary Star senior forward Marina Erosa said. "We came into this game bringing our all and putting our hearts on the court. We are going to keep going strong from here on out."

Mary Star will next host Compton Early College in a nonleague game on Thursday.

Registration is now open for the April 18th Pathways to Employment that is organized each year by the Northwest San Pedro Neighborhood Council. Youth from throughout the Harbor Area are encouraged to attend this free Employment Preparation and Career Guidance event. See More
yesterday