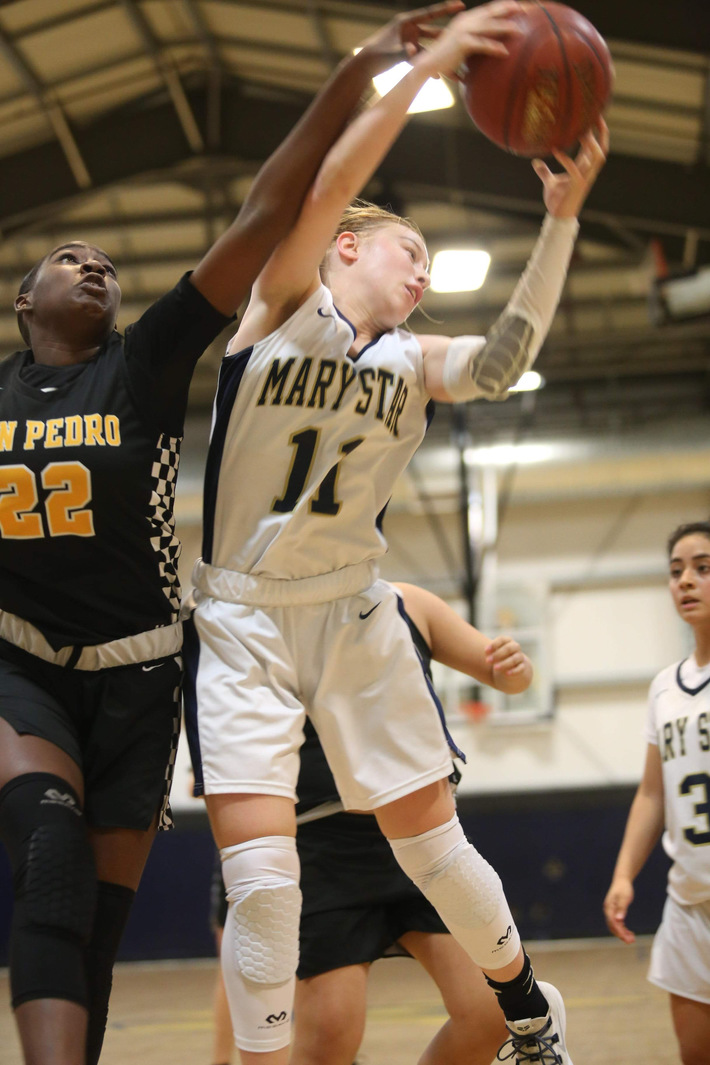 In the first crosstown meeting with in-city neighbor San Pedro since the 2001-2002 season, it was a Star-studded performance from the opening tip as Mary Star bolted to a commanding lead in the first quarter and never looked back before steamrolling their way to a convincing 62-28 victory over the Pirates on Saturday at Mary Star High.

Mary Star (8-4 overall) made a massive statement in a crosstown battle that proved to all in attendance that they are more than capable of making another huge run after last year's incredible run to the CIF-Southern Section Division 5-AA semifinals and CIF Southern California Division 5 Regional quarterfinals.

The Pirates (1-6) meanwhile, have challenged themselves with a demanding nonleague slate, looking to put together the right formula under first-year coach Kevin Simpson as they compete in the Marine League & in Division 2 of the CIF-Los Angeles City Section.

To many in attendance, it was 'just another game', but the magnitude of the victory from a hometown perspective still weighed heavily on the minds of the Stars, who took a team photo with the scoreboard still flashing the final score after the postgame handshake.

"It was a great game, full of high intensity and an amazing team effort," Mary Star senior center Jenna Miloe said. "We worked hard to get to this moment. In the end, I believe the score speaks for itself."

A relentless, in-your-face defense was the order of the day for seven-year head coach Victor Tuberosi and Mary Star, who one day earlier won the St. Monica Tournament championship. That ingredient was served up early and often which frustrated San Pedro into numerous turnovers. The biggest catalysts was the junior guard tandem of Isabella Serrano, Kaitlyn Oasay and Cristina Camacho, who also turned it up offensively.

On top of that, Mary Star's other two starters in Miloe and senior guard Sarah Leyba were also effective defensively in limiting San Pedro junior guard and leading scorer Courtney Marshall, who only scored seven points.

"It was extremely important for us to show (the Pirates) right at the beginning that we mean business," Leyba said. "Our whole mindset as a team was, we were going to win this. No matter who we face, we know if we use our collective talents at 100%, we can't be stopped."

Serrano scored 13 of her game-high 16 points in the first half, including combining with Camacho to nail back-to-back three-pointers followed by an Oasay layup to put Mary Star up 20-6 at the end of the first quarter. The lead got even wider for Mary Star with a 22-5 second quarter blitz to go into their locker room at halftime with an insurmountable 42-11 advantage. In fact, freshman guard Paula Serrano, Isabella's sister, scored seven points off the bench.

The only low spot for the Stars came in the opening minute of the second quarter when Oasay went down with a slight twist of her right ankle when she came down on the left foot of San Pedro junior center Gianna Dileva after a missed running jump shot. Oasay walked off the court with help from teammates and played sparingly afterwards.

“I wanted to keep playing because I knew it was a big game against our neighboring school,” said Oasay, who finished with 6 points, 5 steals, 4 rebounds and four assists. “I ended up cheering our younger players that came off the bench and they definitely brought the fire to (San Pedro). I’m so proud of my sisters!”

The second half saw San Pedro step up their level of play and Dileva was effective inside as she eventually led the Pirates with 9 points, 11 rebounds and five blocked shots. Junior guard Annalisa Banuelos was San Pedro's third highest scorer with 5 points.

Marshall was encouraged by the team's effort in the second half but also had concern for San Pedro's inability in the early stages to break down the opposition's defensive pressure.

"I think we just had to stop doubting ourselves, throwing the ball (long) and communicate better," said Marshall, who also plays volleyball for San Pedro. "Other than that, we fought hard in the second half."

The top highlight of the night for San Pedro belonged to sophomore guard Gezelle Garcia. Even though she didn’t have the best of nights, Garcia opened off the fourth quarter by swishing a three-pointer from the left corner, which prompted Simpson to give her a high five as she hustled back on defense.

“I felt good to put something on the board to help us start the final quarter strong,” Garcia recalls her only basket of the game. “I’m proud of my team for doing better in the second half.”

Isabella Serrano ended up with three assists and five steals to go along with her 16 points for Mary Star, while Paula Serrano scored 13 and Leyba scored 10.

Mary Star will next compete in the Savanna Tournament which begins Monday, December 23, while San Pedro's next game will be Thursday at Mendez of Los Angeles in nonleague action.

Springtime is in the air. Time once again to get your lineup cards.San Pedro Prep Baseball & Softball for 2020 will be at a fever pitch with tons of potential all around San Pedro, California, with none greater potential more than that of San Pedro High baseball. With all but three players back from last year and the addition of an impact transfer, the Pirates are…See More
14 hours ago
0 Comments 0 Promotions