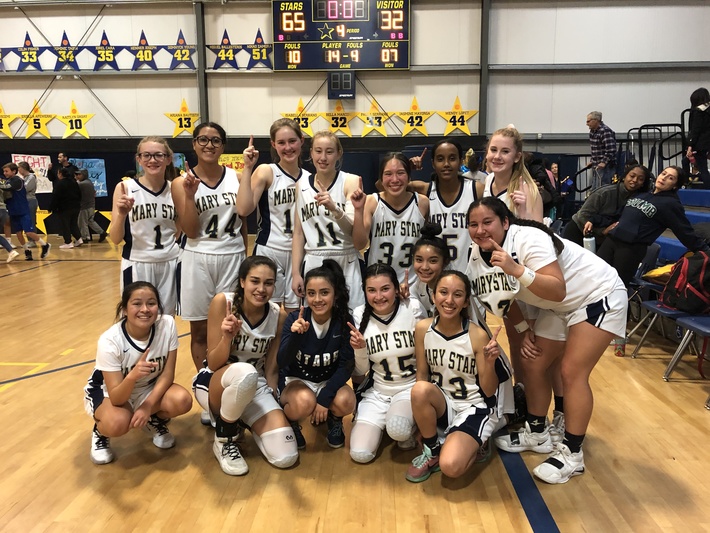 The San Pedro Prep Sports world all shut down, along with the rest of high school sports in California, with the sudden arrival and rising cases of the coronavirus pandemic on March 14, 2020, yet there were still some amazing memories that were gained, even after the fact with several signing day ceremonies.

Here are the top five stories of an otherwise abbreviated year.

In a year of uncertainty, the biggest achievement of all belongs to this team of Stars.

Although it was not won outright, Mary Star's girls basketball program finally added a new small star in their gym to commemorate their first league crown in 36 years after sharing the Santa Fe League championship with St. Genevieve and St. Pius X/St. Matthias Academy. Yet, it was Victor Tuberosi's team that was the first of the three tri-champs to clinch their share, and the Stars were also the only one of the three to win a CIF-Southern Section playoff game.

Mary Star also defended their home court well, winning their last eight in a row after losing their home opener, also winning all four league home games by an average of 26 points, including holding St. Genevieve to just 11 points.

Serrano, Camacho and Oasay all return with hopes of playing their senior season.

February 21, 2020 was definitely a historic day for San Pedro High baseball and its star pitcher.

Defeating Bellflower, 14-0 in five innings on the road to begin their shortened season was tempered by the fact that the biggest headline of that game belonged to Travis Connelly, as he threw a no-hitter with 10 strikeouts out of 16 batters faced. Only a two-out walk in the bottom of the first inning prevented a potential perfect outing.

Connelly only needed to toss 53 pitches, and he also hit an RBI-double during a nine-run second inning onslaught by the Pirates.

The Pirates' girls soccer program was once again unbeatable in the Marine League, winning all ten games by a combined 71-0 margin, then piled up two heart-stopping victories in the CIF-LACS Division 1 playoffs, first outlasting Garfield, 2-1 thanks to an overtime goal by All-City Division 1 selection Dominique Saxey-Santillo, then in the quarterfinals, a 35-foot free kick goal in the second half from talented All-City Division 1 midfielder Isis Valdes eliminated Cleveland, 1-0.

Sadly, San Pedro's heart was broken once again with a third straight semifinal loss, this time in a shootout to eventual runner-up Palisades Charter after the game ended in a 1-1 draw.

It was the only league championship at the San Pedro-based Charter high school, but it was also not surprising.

Steamrolling their way to a ninth league championship in ten years, and second straight Imperial League crown, the Polar Bears finished with a second round CIF-LACS Division 2 overtime loss to Maya Angelou of Los Angeles after knocking off Belmont, 10-0 in the opening round.

The incredible scoring tandem of Keely Bales and Sophia Alvarez made life extremely difficult for all who opposed POLA, as they combined to score an insane 89 goals: Bales, a 2020 POLAHS graduate, scoring a school-record 47 goals, and Alvarez, a Cal State Dominguez Hills verbal commit, producing 42 goals of her own.

2020 closed out strong with a series of signings on November 11 and December 16.