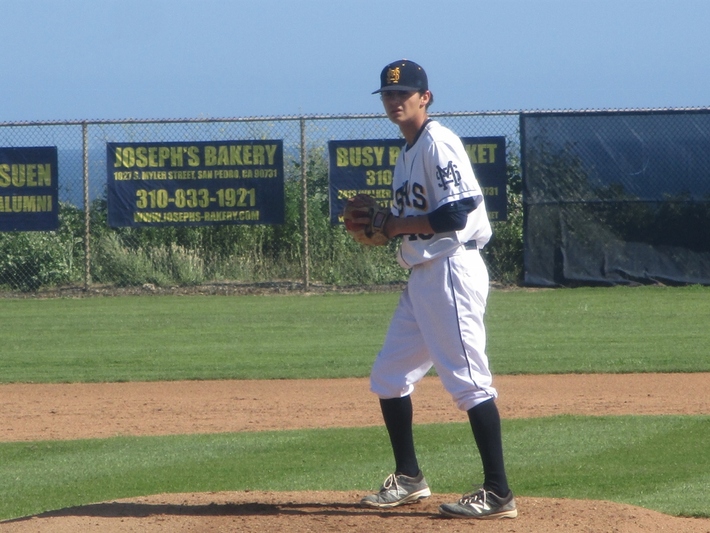 As we continue this special San Pedro News Pilot Class Of 2020 spotlight feature series on student athletes at the San Pedro-based high schools whose senior years were cut short due to the coronavirus, here is our feature on Mary Star Of The Sea High baseball utility player Marco Ibarra.

A two-sport athlete who's father Rick is a former baseball coach and current athletic director at Mary Star, Ibarra has left his own mark at the school as a talented pitcher and catcher for the baseball team, who posted an 8-3 record in the COVID-19 shortened 2020 season, with all three losses sandwiched in between an eight-game winning streak.

Ibarra was an all-league selection a combined five times in both baseball and football, and in his senior year with the football team, he was the starting quarterback and a no-nonsense hitter as a defensive back, helping power the Stars to a share of the 2019 Camino Real League championship. As of now, Ibarra is undecided to where he was to potentially play at the college level.

WHEN YOU FOUND OUT YOUR SENIOR SEASON WAS ENDING DUE TO COVID-19, HOW DID YOU FEEL IN REGARDS TO THAT TURN OF EVENTS: "I was heartbroken. I know we can't control what happened but we worked hard through Fall and Winter and for seniors for four years to have it end like this is disappointing."

WHAT WAS YOUR FAVORITE SEASON OUT OF YOUR FOUR YEARS AT MSHS: "My junior season. We tied a school record for wins (in a season with 23) and went to the (CIF-Southern Section Division 5) quarterfinals."

WHAT IS YOUR MOST MEMORABLE MOMENT IN A GAME: "During my junior year against Salesian, I hit two home runs. One solo home run to tie the game early on and a two-run homer to take the lead in the sixth inning."

WHAT WILL YOU MISS THE MOST AT MSHS: "Competing and representing my school both in football and baseball."

WHAT IS THE MAIN GOAL YOU HOPE TO ACHIEVE ONCE YOU SET FOOT ON A COLLEGE CAMPUS: "My goal is to grow as a baseball player, help my team win games and hopefully go on and play baseball for a long time."

WHAT WAS YOUR FAVORITE MOMENT PLAYING FOOTBALL AT MSHS: "When we won league for the first time in ten years."

HOW MUCH PRIDE WAS IT FOR YOU TO CONTINUE ON THE TRADITION OF WALKING THROUGH THE ALLEYWAYS FROM MARY STAR OF THE SEA CHURCH TO DANIELS FIELD: "Walking through the alley means a lot to alumni and players now. It is hard to describe how it feels walking down that alley. It is one of the coolest traditions we have."

FINALLY, YOUR THOUGHTS ON THE EXPERIENCE OF PLAYING BASEBALL HOME GAMES AT FROMHOLD FIELD: "It is the most beautiful field in California, even all of the United States. There is no other way to put it."