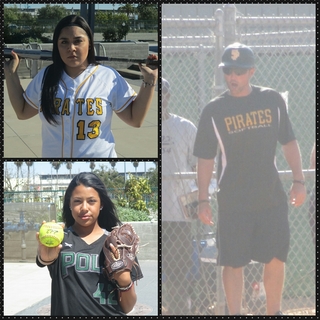 Cline was chosen as the CIF-LACS Division 1 Softball Player Of The Year after helping guide the Pirates to their record 17th Division 1 championship last weekend. De La Roca was awarded Pitcher Of The Year for the second year in a row, and San Pedro coach Robert Whitney was given the Coach Of The Year honor after leading the Pirates to a 25-9-1 overall record, winning 18 out of their last 20 games and the Marine League title with a 9-1 mark.

Having a career season, Cline was virtually unshakable in pressure situations for San Pedro with three game-winning hits, two of them in the eighth inning of two Marine League victories, including a walk-off RBI-double against Carson on April 6. The four-year veteran finished with a .393 batting average, 3 home runs, 21 RBIs, 35 hits, 9 doubles and 2 triples, also finishing with a perfect 1.000 fielding percentage defensively behind the plate.

De La Roca had another spectacular run at POLA, going 28-2 in the circle with a 0.60 earned run average, 357 strikeouts in 186 innings pitched, 13 shutouts, a pair of no-hitters and one perfect game. The New Mexico State-bound four-year veteran was also devastating at the plate with a .609 batting average, 9 home runs, 32 RBIs, 53 hits, 7 doubles, 3 triples and 27 runs scored for the CIF-LACS Division 1 semifinalist Polar Bears.

Justiniano batted .375 and led the Pirates in home runs (4), RBIs (27), total hits (36), runs scored (27) and doubles (11) while also piling up a .911 fielding percentage at the hot corner with 45 assists, turning a pair of double plays and was on the final out of a third double play. The four-year veteran was also a perfect 3-for-3 in stolen bases.

Congratulations to all the honorees and what a great ending to a spectacular 2017 softball season.