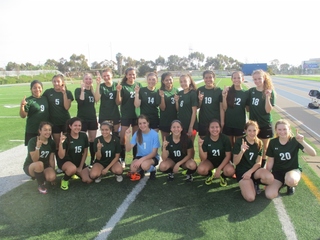 By virtue of a hat trick and an assist from junior midfielder Briana Mancilla, the Polar Bears took down host Middle College of Los Angeles, 6-0 at Los Angeles Southwest College on Wednesday to continue their dominance of the league. Freshman forward Keely Bales scored a brace (2 goals) while assisting on Mancilla's first goal in the 11th minute.

Bales and Mancilla would score the last two goals of the first half for a 3-0 lead, and then Mancilla polished off her hat trick in historic fashion in the 48th minute. Historic in the sense that was Mancilla's 86th career goal, putting her atop the list as the greatest goal scorer in San Pedro Prep Girls Soccer history, eclipsing the record of 85 career goals by former San Pedro High girls soccer star Alyssa Mullenhour from 2004-2008.

Even then, the Polar Bears weren't finished in establishing their momentum, as Bales would one-time in her second goal off a cross pass from senior forward Anna Vidovich, and then sophomore midfielder Britney Delgado pounced on a Middle College defensive pass mishap and blast in the sixth goal for the Polar Bears.

Freshman goalie Katelyn Viducic only needed to make three saves to record her tenth shutout of the year, which all came in Crosstown League play, in which POLA has obliterated the competition 106-5 in twelve games thus far.

Not being able to schedule any nonleague games put POLA in a quandary due to league play beginning in December, and they went 1-3 in the San Pedro Lady Pirate Cup against challenging competition to keep their competitive juices flowing, all losing by a trio of 3-0 decisions to the likes of San Pedro, Taft of Woodland Hills and Bishop Montgomery of Torrance.

All three Lady Pirate Cup defeats were closer than the final scores indicated. Most specifically, the losses to Taft and Bishop Montgomery took those teams all but the final 15 minutes to finally score.