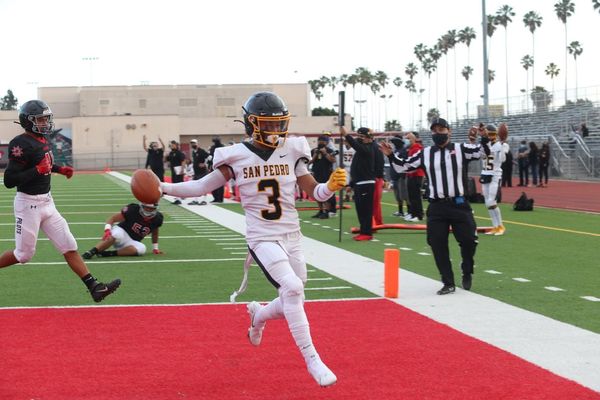 That's exactly how long it has been for San Pedro High football to showcase themselves on the gridiron.

November 25, 2019 was when the Pirates previously played. The entire Fall semester of 2020 was void of high school football in California due to the coronavirus (COVID-19) pandemic. The Los Angeles Unified School District approved for high school sports to return in the Spring of 2021, allowing football teams to play for four weeks in April. Due to health and safety protocols, the Pirates were unable to play during the first two weeks.

When it was finally 'go time' this past Friday, the Pirates were unloaded, and fully unleashed.

In the first-ever Spring version of the Battle Of The Harbor in Marine League action, the Pirates scored early and often in every imaginable way possible against host Banning of Wilmington, who was already 2-0 and coming off a high in defeating Carson for the second straight time. Thanks to several spectacular moments and the sudden uprising of three perpetual performances, San Pedro overwhelmed Banning en route to a 64-19 victory for their second straight Battle Of The Harbor triumph at Chris Ferragamo Field.

This was the second highest point total the Pirates ever produced against Banning. Want to know what the record was? It's simple. Go all the way back to the Fall of 1921, when San Pedro won the inaugural Battle Of The Harbor matchup by a 77-0 margin.

Junior quarterback Aidan Jackson was the next man up for San Pedro after senior Dylan Kordic chose to focus on baseball after the Pirates were denied of two scheduled spring games against Dorsey and Narbonne due to cancellations, including last week when the Gauchos had a positive COVID test within the program. This was due in large part to the LAUSD rule of not being able to allow student athletes to play two sports simultaneously.

Jackson, who's older brother Austin quarterbacked the 2016 Pirates to a win over Banning in the LAUSD's Coliseum Gridiron Classic at the Los Angeles Memorial Coliseum, threw for 264 yards and was nearly perfect, completing 13-of-15 passes without an interception in his first varsity start. Aidan's favorite target was junior wideout Chris Nixon, who caught touchdown passes of 54 and 14 yards in the second quarter.

Sarmiento scored three touchdowns in three different ways, an 8-yard run out of the wildcat formation for a 19-0 first quarter lead, and two third quarter scores on a 62-yard pass from Jackson, and a punt return that forced the running clock situation. Konopka was also crucial on the other side of the ball, returning a first quarter interception 39 yards for a touchdown, and repeating that feat with nine seconds left in the half for a 44-13 halftime advantage.

Konopka's older brother, Kai Kaneshiro, also ran for a touchdown in the 2016 win over Banning at the Coliseum.

Junior wideout Kejuan Bullard opened off the second half barrage by returning a short Banning kickoff for a touchdown 17 seconds into the third quarter. San Pedro's other touchdowns came with a nine-yard touchdown run by sophomore RB/LB Roman Sanchez that was set up by a Sarmiento 41-yard punt return, and a six-yard touchdown reception late in the second quarter by Eastern Washington-bound senior WR/DB Joshua Johnson.

With this convincing victory, San Pedro now leads the Battle Of The Harbor series 41-40-3 with their impending Fall 2021 rematch upcoming. The Pirates host Carson next Friday in their second and final spring football game.