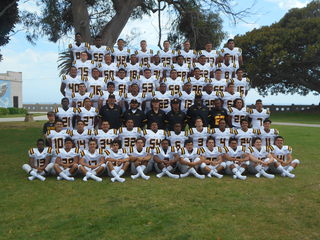 The San Pedro High football team had one of the most remarkable seasons to date in 2014, posting an outstanding 11-2 season, a three-way share of the Marine League championship, and earning a spot in the CIF-Los Angeles City Section Division I semifinal round.

On that night, the Pirates may have lost 33-30 to league foe Carson, but they had their fate in their own hands.

Senior quarterback Jacob Miller had his junior year end with his last desperation pass falling harmlessly to the ground in the end zone as time expired which would have given San Pedro the victory. However, both Miller, and the Pirates had nothing to be ashamed of... and it will only motivate them to achieve greater things in 2015.

The challenge early on? Only the most difficult nonleague slate in coach Mike Walsh's 25 years as the head coach.

San Pedro will take on the likes of Downey, a CIF-Southern Section Northeast Division runner-up a season ago, in an intriguing August 28 season opener on the road. On a Thursday night, the Pirates once again clash with Roosevelt of Los Angeles on September 3, a CIF-LACS Division I first round rematch that San Pedro won, 28-7. San Pedro will then a short bus ride to another beach city... Redondo Union on September 11, bringing back an old series that was reunited in 2012 and 2013 before they took a year off. The Pirates lost both games to the Sea Hawks by a combined 5 points.

Rounding out the nonleague slate, San Pedro will have back-to-back home games against the only holdovers from last year's nonleague slate, Culver City (September 18) and Fairfax of Los Angeles (October 2). Throw in the fact that three of their five Marine League games (Banning of Wilmington, Washington Prep of Los Angeles, Carson) are on the road in October, that should tell a lot about the 2015 Pirates come playoff time.

Of course, if San Pedro is able to win those first four Marine League games, the season finale on November 6 against Narbonne at home is likely the Marine League championship game, where the Pirates will look to gain retribution from last year's 28-24 loss in the final 80 seconds to the extremely talented and athletic Gauchos.

San Pedro returns three All-City Division I selections from last season, including the reigning City Section Lineman Of The Year in senior tight end Mike Spinosa, who along with senior All-Marine League offensive lineman Juan Campuzano are the only returning line starters from last year's club that set a school record for total rushing yards in a season with 3,299 along with 205 first downs, and an overall 4,779 yards of total offense, good for second all-time in San Pedro football history.

Also, senior WR/DB Antonio 'A.J.' Frazier, an All-City Division I first team defense selection, and the reigning Marine League Defensive Player Of The Year, is back for a third and final year, looking to have a better finish to last year suffering a season-ending injury early on in the Pirates' quarterfinal victory over Arleta.

Frazier had 72 tackles (53 solo), two interceptions, four pass deflections, a forced fumble, a recovered fumble and a sack while also gaining 515 all-purpose yards on rushing, receiving and special teams, rushing for a 60-yard touchdown against Roosevelt last season, and adding another score on a nine-yard reception against Fairfax.

Trying to replace the near 2,000-yard, 31 touchdown combined rushing performance of the 2014 Marine League MVP, City Division I Defensive MVP and News Pilot Prep Football Player Of The Year Chris Alvidrez and Christian Serna is almost improbable, but the Pirates have viable options at running back, as they always do.

Juniors Richard Villegas, senior Vince Amalfitano and sophomore Adam Swearingen appear to be the front-runners for the other three starting spots in the offensive line.

Excelling well in a lot of summer kicking camps, junior Tanner Carcamo will be the latest in San Pedro's full stable of kickers. Carcamo replaces Christian Mills, who booted a 30-yard field goal in the closing seconds to defeat Carson, 17-15 last November, which gave the Pirates a three-way share of the Marine League crown, and the overall top seed of the CIF-LACS Division I playoffs last season.

San Pedro has a lot of talent from last year's 9-1 junior varsity team entering the fray who will all look to make their presence felt.

Going into their 108th season of prep football (including rugby), San Pedro has posted a record of 538-380-38 overall under 21 different coaches.