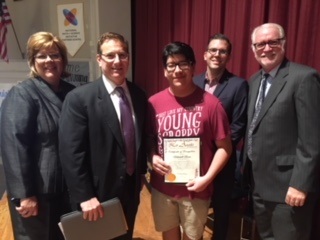 Overall, more than 407 tests were taken, jumping 51 percent over the previous year. But more importantly, the average rate of increase on passing scores soared 77 percent, compared to 6 percent nationwide. San Pedro High registered an increase nearly 13 times the nation’s overall rate, and ranks statewide as ninth-best, according to the College Board, a nonprofit group administering the SAT and Advanced Placement programs that help prepare students for higher education.

“I am so proud of these students for taking charge of their futures, the National Math and Science Initiative (NMSI) and all of their teachers for helping engineer their success,” said Dr. Richard Vladovic, an L.A. Unified board member whose district includes San Pedro High. “I would also like to thank our valued partners at Northrup Grumman for providing extra financial incentives and making an investment in our students and our community.”

On Wednesday, at a campus event that was part rally and part ceremonial, San Pedro High
of the Los Angeles Unified School District recognized students, who helped to lift college
preparation at the school to new heights. Students, teachers and parents cheered as the
college-bound achievers walked across the stage.

Each student received $100 for every test passed, totaling $16,000 overall, said Principal
Jeanette Stevens, who attached a check to each certificate she handed out. “We’re excited for
all the students here today,” she said, “and for their accomplishments.”

Stevens stakes the school’s success to participating in the National Math and Science Initative. The initiative co-funded the College Readiness Program locally with Northrop Grumman Corp., a global security company based in Northern Virginia but has a large presence in the Southland.

Those funds, along with government grants, helped to provide teacher training, including at off-site locations; stipends for them to teach Saturday classes; and covering part of the student’s exam costs in college-level math, science and English classes for the Advanced Placement tests.

The program has expanded student access and achievement in rigorous Advanced Placement
classes in more than 1,000 schools across 34 states. An AP exam score of three or higher (on
a five-point scale) demonstrates mastery of college-level coursework and qualifies students for
course credit at a large majority of U.S. colleges and universities.

But Gregg Fleisher, the initiative’s president, said he hopes to expand across the District, as the nonprofit group has done in New York City, where students in more than 200 schools use the program.

He said the program exists in five L.A. Unified schools, but he hopes to expand. He cited
New York City, as a model, where students in more than 200 schools have access to
the program.

“Our goal would greatly benefit LAUSD strudents if we had this program in more schools,”
Fleisher said. “There are so many schools like San Pedro that could have massive gains
because the supports are there, the teachers are there, the students are there.”

A representative from Northrup Grumman said the company’s participation helps to benefit
college-bound students and one day that may lead to a job applicant. “We have to make sure
that we have a next generation workforce that is educated, prepared and can succeed in
college,” said Dan Nieman, corporate citizenship manager at Northrop Grumman.

Mitchell Rivas, a graduating senior at San Pedro successfully completed four Advanced
Placement exams in math and science courses, appears to be a future employee that
companies might one day seek out.

He received a $400 check on Wednesday, meaning he passed four math and science Advanced
Placement exams. Rivas listed several schools, including Stanford University and
Massachusetts Institute of Technology as among those courting him to continue his education on their campuses. Making a college decision will be, to this point, one of his biggest life decisions.

Many, many super congratulations to the students, to Jeanette Stevens, Dr. Vladovic and to all concerned. This does not happen without an immense amount of hard work. Very well done, all of you!