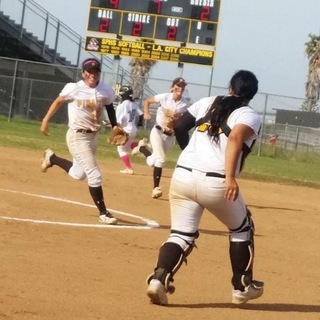 No one thought it could be possible... except San Pedro High softball and their loyal followers.

There was just one thing to get when they were on the brink of doing something they hadn't done since 2011, and that was the final out, which all fell on the shoulders of junior third baseman Ricki Justiniano the moment Carson senior infielder Danika Justis hit a line drive right at her.

"I was truly focused," Justiniano said. "I didn't really realize what happened until I saw my team's reaction then I was just full of excitement."

Justiniano and the rest of the Pirates had every good reason to get excited, as the host Pirates defeated Carson, 4-2 Tuesday in a pivotal Marine League encounter for the first time in five years which featured so many agonizing setbacks to a school San Pedro once defeated in five straight CIF-Los Angeles City Section Division I championship games from 2000 through 2004.

With the win, San Pedro (16-9-2 overall, 7-2) is now tied for second in league play, and a game behind Banning of Wilmington for first with one game to go, against the same Pilot team on Thursday at San Pedro High where if the Pirates were to be victorious, then all three schools, Carson included, would share the Marine League crown.

It was a rousing celebration, but a brief one knowing what's in store in 48 hours, but it was a gratifying win not only for the team itself, but for the school and entire town as a whole.

"Honestly, it feels great to make our school and our city proud," San Pedro junior catcher Andrea Cline said. "Because in the beginning of the year we were the underdogs. Nobody expected us to beat them this year so this feels truly amazing."

In what was the start of their most challenging week of the 2016 season with so much on the line, the host Pirates delivered in passing their first test, and it was a critical one no doubt.

True to form, Carson (17-11, 7-2) would take a quick 2-0 lead in the first inning off a bloop single from senior pitcher Alissa Cienfuegos, but from there, San Pedro junior pitcher Cindy Robles would step up in a mighty way and pitch a career performance in the circle, only allowing two hits in the final six and posting a career-high 11 strikeouts. Robles had one game plan in mind against a powerful Carson hitting lineup.

"I knew I had to strike out and/or keep everyone off the bases," said Robles, who later added: "And make sure to walk their power hitter because she was the one to get them back in the game last time."

That 'power hitter' is Carson senior third baseman Aniesa Maulupe, the Long Beach State-bound three-time All-City stud who has killed San Pedro all throughout her career in many ways, including crushing a pair of solo homers off Robles in a 5-3 Colts victory the first meeting of the season on April 14.

Robles intentionally walked Maulupe all three times she stepped up against her, even when there wasn't a single Colt on base.

Eventually, San Pedro would get their chance to crack Cienfuegos, and they came up clutch in the bottom of the third as a leadoff double from sophomore Anessa Quiroz followed by a single from junior shortstop Deanna Gonzalez would put runners on the corners for Cline, who then blasted a double to left field to drive both home and knot the score at 2-2.

"I love being put in those situations," Cline said. "It gives me the opportunity to put my team back in the game and that's the mindset you must have. You have to be 'hungry' when you walk up to the plate."

That's something sophomore right fielder Quincy Greenwood also had in mind when she led off the bottom of the fourth inning.

First pitch Greenwood sees, she popped it up in foul ground towards Carson junior first baseman Madison Loui, but she inexplicably dropped it, giving Greenwood another opportunity, and then she deposited Cienfuegos' next offering with a shot over the center field fence, giving San Pedro its first lead at 3-2.

"I was relieved when Carson dropped my pop up because it gave me another chance to get a hit that can help us win," Greenwood said. "It felt like a satisfying solid hit."

Even with Maulupe getting the old school 'Barry Bonds treatment', Carson left five runners on base, including four in scoring position as Robles would end the fourth, fifth and sixth inning with a clutch strikeout, and suddenly, the Pirates, and Justiniano knew what they needed to do in the bottom of the sixth inning.

"I was just focused on getting on and giving us an opportunity to score," Justiniano said.

Sure enough, Justiniano smacked a double to lead off the bottom of the sixth, and would be rewarded by scoring on Greenwood's double for her second critical RBI, and literally double the Pirates' advantage. "I was just looking for a pitch to drive and I wasn't going to miss my chance because I knew being up one and playing a respectable team would not be enough," Justiniano said.

Greenwood added: "That was a great hit because I just had the urge to knock Ricki in and give it my all."

Robles was extremely grateful to Greenwood, who also is another pitcher in the Pirates' rotation.

"I am so proud of her because even though she hasn't gotten that many chances to shine as a pitcher, she surely made up for it with her bat," Robles said. "I'm just very proud of Quin overall."

Further adding to her own cause, Robles was not about to let this moment for herself, or the Pirates, slip away by promptly striking out the first two Carson batters in the top of the seventh before surrendering a single to sophomore Shanelle Sablan, who was left stranded on Justis' game-ending line out to Justiniano.

"This feels amazing to have finally beat the Colts because they are a great team," Justiniano said. "But I knew if we played together we could achieve great things."

The Pirates' final game of the season against Banning is Thursday, 3:15 pm at San Pedro High.

1992 still feels like a long time.That was when San Pedro High baseball won their first CIF-Los Angeles City Section championship when it outlasted Polytechnic of Sun Valley at Dodger Stadium under the leadership of longtime coach Jerry Lovarov.Reaching a championship game was few and far between for the Pirates, only managing two more appearances in 2004 when they lost…See More
Sunday
0 Comments 1 Promotion