Even in these perilous pandemic times... several San Pedro Prep Sports student athletes still managed to keep their dreams alive with a series of signing days during the Holiday season.

It culminated on Wednesday, December 16 with four San Pedro High standouts, two each from both football and girls soccer, celebrating their achievements with a virtual Zoom signing day ceremony.

The football duo of offensive lineman Kyle Keller and WR/DB Joshua Johnson are both headed to Division 1 programs. Keller is off to Drake University, and Johnson is Eastern Washington bound. Both were all 2019 All-CIF Los Angeles City Section Open Division team and started in the 2018 CIF-LACS Division 1 championship against Dorsey, which the Pirates won 22-20.

San Pedro High was not the only high school in town that had their signing moments in the sun. Mary Star Of The Sea and Port Of Los Angeles High Schools also celebrated various student athletes that reached their dreams in November, with the most heralded being the signing of girls volleyball outside hitter Serena Ramirez signing on to play beach volleyball for the University of Arizona.

"(Arizona) was always my dream school, so it was a dream come true when I got their offer," said Ramirez, who during her junior year at Mary Star posted over 200 kills in being named to the All-CIF Southern Section Division 6 and Santa Fe League first teams for the eventual league champion Stars.

Ramirez is a three-time all-league selection, including her freshman year at San Pedro where she was All-Marine League second team before transferring to Mary Star for her sophomore and junior seasons.

Over at POLA, it was the most unique signing of them all as the softball tandem, and twin sister duo of Faith and Gracie Torstensen both chose York College of Nebraska as their destinations. Faith and Gracie's older sister Allison Torstensen is already planning to begin her second season playing Division 1 softball at George Mason University. All three Torstensen sisters played together in high school for Allison's junior and senior seasons (2018 & 2019).

The twins both share the same goal as to why they chose York College. 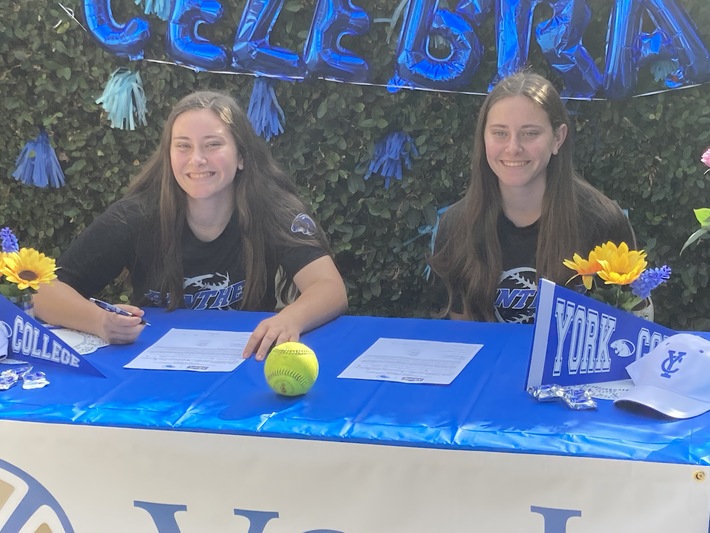 "I chose York College because of the wonderful people, beautiful campus, and Christ-centered education," said Faith, who is a pitcher for POLA, and she was the reason why the Polar Bears won their only game of a COVID-19 shortened 2020 season, delivering a game-tying RBI-single in the top of the seventh inning against Bell Gardens, and ended up winning the game as a relief pitcher with 2.1 scoreless innings during POLA's 3-2 victory.

Gracie, who plays infield and outfield for the Polar Bears, on how she adjusts playing alongside her sister Faith: "It's sometimes a big challenge playing alongside my sister, but it is also comforting to know I'm not alone. We get to experience many things together that without softball, we might never have experienced."

Finally, the San Pedro girls soccer duo of Johnson and Danelo were both important contributors to the Pirates' continued dominance of the Marine League, where they have won a staggering 19 out of 20 league titles, and the last 15 in a row, reaching the CIF-LACS Division 1 semifinals three straight seasons, including the 2019-2020 season. 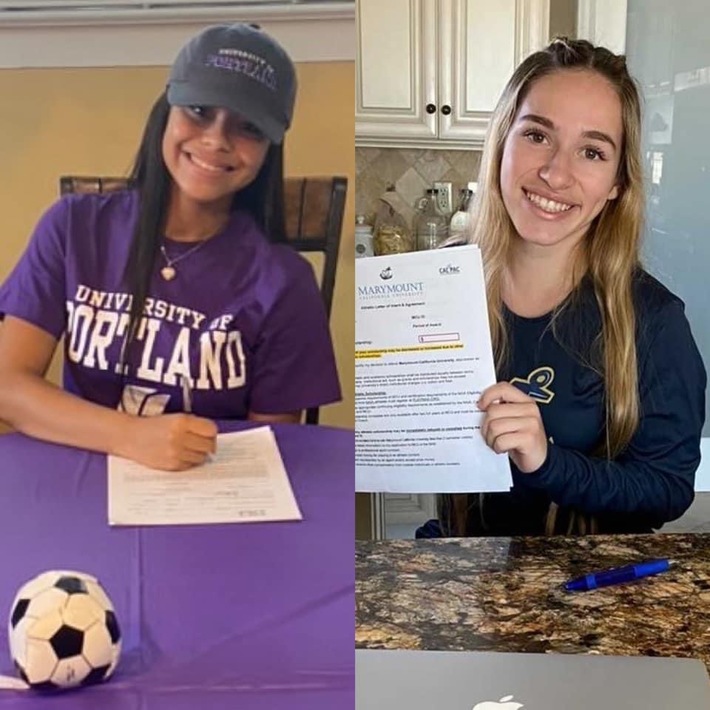 Johnson on why she chose Portland: "(Portland) is competitive both on the soccer field and in the classroom. I knew that the environment and the support around me would push me to be better every day. The moment I walked onto that campus, I got the feeling that I can spend the next four years here. The campus is beautiful."

And Danelo on why she chose MCU: "I chose Marymount for a couple of reasons. The main reason is that I get to be close to my family, and they'll be able to watch me play. Also, the coaches are great. They were so easy to talk to and I barely felt nervous around them. Lastly, my future teammates I already know are amazing soccer players and I've even looked up to some of them when I was younger."

There are several more verbal commits spread around San Pedro, California, and the next signing day opportunity for all, comes in early February 2021.

(Note: Special thanks to the Johnson and Danelo families for sharing their photo of Briana and Kylie, and to the Keller, Johnson, Torstensen and Ramirez families for inviting us to your signing day ceremonies.)

featuring "Where Do We Go From Here", a song by Dominance Tha MC exclusively in this issue!See More
Jan 21
0 Comments 0 Promotions