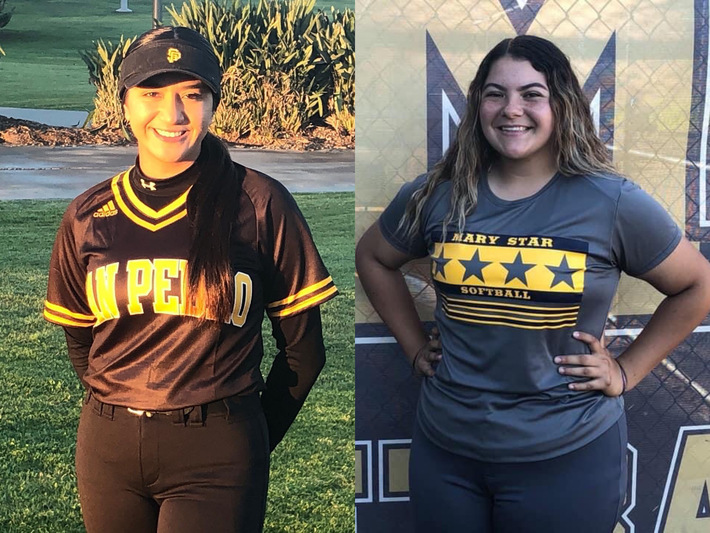 Just like every other Spring sport in high school, the 2020 San Pedro Prep Softball season was short circuited by the coronavirus pandemic, which wiped out tremendous aspirations for the teams of San Pedro, Port Of Los Angeles and Mary Star Of The Sea High Schools, all of which had at least one college bound player on their roster.

It also wiped out a potential nonleague showdown between the Pirates and the Stars which was set for May 1 at Mary Star High.

Still, it did not discourage the efforts of two incredible talents that still managed productive seasons.

Over at Mary Star, Loyola Marymount-bound pitcher Alessandra Samperio was her usual self in the circle, posting a 5-2 record, a 0.85 ERA with 64 strikeouts in 41 innings pitched, and both of her losses to Woodcrest Christian and Schurr of Montebello were by identical 2-1 decisions. Samperio did post solid outings in victories over the likes of El Segundo, Bishop Montgomery, Chavez of San Fernando and yes, even Banning of Wilmington in her final start on March 11.

No one had a productive, short year of hitting quite like San Pedro senior P/SS Briana Velazquez.

The Bethune Cookman-bound four-year veteran went on a tear, hitting 14-of-20 for a sparking .700 batting average, with a home run, two doubles, two triples and four RBIs for the Pirates, with the home run coming in Velazquez's final high school game against El Dorado on March 7, which was also her 18th birthday.

Thanks to those exploits, Samperio and Velazquez once again share the San Pedro News Pilot Prep Softball Player Of The Year honor for 2020. It's Velazquez's second POY honor, and the third year in a row for Samperio.

In all, San Pedro finished 3-3 against tough competition, with their biggest win coming on March 3, a 11-2 road victory over Mira Costa of Manhattan Beach on a day where the Pirates pounded out 14 hits, none bigger than a seventh-inning two-run home run by Chaminade University-bound catcher Brianna Talamantes. Junior inifielders Jo Jo Krause & Sierra Sandoval, along with sophomore P/OF Vanessa Reed, also had wonderful hitting seasons.

The Pirates also may have found their pitcher of the future in freshman Layla Jelenic, who threw a complete game with nine strikeouts in the win over Mira Costa, and won all three of the Pirates' games, the other two were in relief.

Mary Star (5-3) was the odds-on favorite to win a third straight Camino Real League championship, and crushed Bishop Montgomery, 10-0 in six innings on March 3 for their only league game all year, highlighted by a grand slam from senior catcher Sofia Amalfitano in a seven-run fourth inning. The Stars will lose nine seniors to graduation, none bigger than Samperio, Amalfitano and San Jose State-bound shortstop Ashley Rico (.409 BA, 6 RBIs).

The season for Port Of Los Angeles never fully took off, as they were only able to play two games, a 3-2 win at Bell Gardens on March 5, and a 11-1, five-inning loss to Peninsula on March 9.

Still, the Polar Bears got incredible efforts from the junior battery of pitcher Faith Torstensen and catcher Larissa Mercado, who both played huge roles in the win over Bell Gardens, where POLA was down 2-1 and to their final strike before Torstensen's bloop single to right drove in the tying run. Mercado then scored the winning run off an error, and she also brought in the Polar Bears' only run at Peninsula with a single.

Westcliff University-bound outfielder Briana Vigil and shortstop Angelina Mercado only played one game each due to injuries, and were not able to play the same game together as they leave POLA four-year letter winners.

Most of the Imperial League teams that POLA was scheduled to compete with in 2020, didn't even get a game in at all due to COVID-19, including last year's CIF-Los Angeles City Section Division 2 champion Harbor Teacher Prep of Wilmington.

DISCLAIMER: This is a shortened version of the usual All-San Pedro News Pilot Team I would normally conduct for baseball and softball due to all the seasons cut short as of Monday, March 16 due to the coronavirus (COVID-19) pandemic. Yet we still choose to honor the efforts of the student athletes in spite of the circumstance.