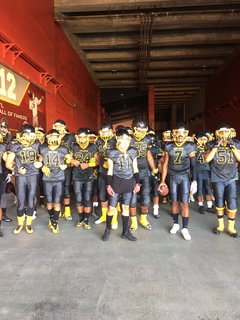 2016 was another spectacular year for high school sports in San Pedro, and there was plenty to be excited about for most programs at San Pedro, Port Of Los Angeles and Mary Star Of The Sea High Schools.

Many playoff runs in the CIF-Los Angeles City and Southern Sections were realized, former doormat programs finally found success, league titles were seized, CIF championships were chased, winning streaks were made, a rare crosstown battle was waged, signing day ceremonies were set, and yes, there were some records broken.

Let's just review some of the most memorable moments in the San Pedro prep sports world shall we...

Saturday, October 22, 2016 was a golden opportunity for San Pedro High football to create a memorable moment for Corey Miller in his first season as head coach... and they would do just that, defeating Banning of Wilmington in the second of two games at the Coliseum Gridiron Classic in the 80th Battle Of The Harbor showdown at the home of the Los Angeles Rams & USC Trojans. Quarterback Austin Jackson's all-around effort with both his arm and his legs, a monster job on defense by the Gafa brothers Sohl and Junior, along with an electrifying 49-yard field goal by kicker Tanner Carcamo to end the first half were the highlights of the Pirates' 20-7 victory over the Pilots in that special Marine League showdown at the Los Angeles Memorial Coliseum. Raymond Geha and Kai Kaneshiro scored the two Pirate touchdowns, Junior Gafa got an interception, and Sohl Gafa recovered a fumble and registered two sacks. San Pedro ended up 10-3 overall with a berth in the CIF-Los Angeles City Section Division 1 semifinals, where it lost to eventual runner-up Dorsey. Not bad for coach Miller's debut year as the head man.

POLA softball pitching great Analise De La Roca was truly a young lady on a mission in 2016, as she bewildered opposing hitters to the tune of 408 strikeouts, setting a new CIF-Los Angeles City Section single season record in going 26-4 with an 0.43 ERA, 20 shutouts, 5 no-hitters and three perfect games. De La Roca took home several postseason awards, such as being the fourth in the history of the POLA softball to be named to the Cal-Hi Sports All-State Underclass Team as a first team pitcher, her first CIF-LACS honor as the Co-Pitcher Of The Year, an All-Area Daily Breeze South Bay first team selection, Coliseum League Player & Pitcher Of The Year... and the 2016 San Pedro News Pilot Prep Softball Player Of The Year. The senior signed on to play collegiate softball at New Mexico State in November. De La Roca willed the Polar Bears to a third straight Division 1 semifinals berth, where one sixth inning collapse led to a 5-3 loss to eventual champion El Camino Real, but POLA won another Coliseum League title plus defeating both San Pedro (twice) and Mary Star along the way.

3. The Shining Stars Of Girls Volleyball

If you were to write a story to explain the 2016 season of Mary Star High girls volleyball, it would be extremely hard to comprehend it. Third-year coach Tyler Jaynes and a special group of nine seniors who have been with the program for three years together, with Ally Spillane, Lexi Andrie, Angela Pisano and Kaitlyn Martinez being the four-year veterans of the group, Mary Star would win its third straight Santa Fe League championship, sweeping all ten matches, and also delivering a strong message in their own city that they are the premier program, sweeping POLA on September 8, and then taking down San Pedro in a convincing four-set triumph on October 5 in front of a standing-room only crowd at Mary Star High. The storied run ended in the second round of the CIF-Southern Section Division 8 playoffs with a heartbreaking five-set loss at Yucca Valley, but will still be remembered as one of the more memorable seasons of all time for the program.

In the first year regime of mother-daughter coaches Crystal Valdes & Chatelaine Ansaldi... the San Pedro High girls soccer team continued their tradition of winning the Marine League championship for an eleventh straight season, but the 2015-2016 Pirates wanted more than that. A talented team of youth and experience would parlay the Pirates to a 20-3-2 season, their first Lady Pirate Cup Tournament championship, and an extended run in the CIF-LACS Division 1 playoffs with an 18-game winning streak, ending with a 2-0 semifinal loss to eventual champion Taft. San Pedro would win all ten Marine League clashes by a combined 55-1 scoring margin. It seems like 2016-2017 will be even better for San Pedro, as they have already avenged their loss to Taft with a 2-0 victory at San Pedro on December 9, and they repeated as Pirate Cup champions on December 23. Current seniors Maddie Villela and Sydney Engel were named to the 2016 All-City overall and Division 1 teams.

Not since Marina Vitalich ruled the pitching circle at Mary Star has the school brought in two incredible talents to the school in their freshman season, but the Stars gained two in 2016 San Pedro News Pilot Prep Boys Basketball Player Of The Year in Joseph Octave, and all-around girls soccer standout Rose Amalfitano. Octave helped the Stars boys hoopers go 17-7 with a third place finish in the Santa Fe League, averaging nearly 20 points a game, while Amalfitano registered three hat tricks in helping the girls soccer team repeat as Santa Fe League champions, scoring a team-high 13 goals overall on the season.

Friday, January 17, 2016 would be the shocker of the year... as San Pedro High girls basketball ended 25 years of frustration with a 36-33 victory over visiting Narbonne of Harbor City, a program that has brought upon so much humiliation and torture to the Lady Pirates during their spectacular run of CIF-LACS, State and National championships. A solid performance from co-2016 San Pedro News Pilot Prep Girls Basketball Players Of The Year in Deanna Valverde (now at Carson) and Melannie Ortiz (graduated), combined with two huge three-pointers in the fourth quarter from Crystal Redd would spring the upset and give the Lady Pirates a moment that will be talked about for years to come. San Pedro would win 19 games and reach the CIF-LACS Division 1 quarterfinals.

Somewhere along the line... the bridesmaid syndrome will leave the program of POLA girls soccer and they will become CIF-LACS champions, but the 2015-2016 season had all the makings of doing just that. Perennial tormenter Los Angeles CES moved up a division, making the Polar Bears instant favorites for the Division 4 crown. Behind a dominant season for current junior forward Briana Mancilla, combined with spirited performances from fellow All-City selections Anna Vidovich and the senior goalie tandem of Emily Haugen (All-City) and Daisy Garcia, the Polar Bears made it back to the championship game, only to fall victim to a penalty kick shootout loss to eventual champion Northridge Academy. POLA finished 22-5-2 and won their sixth consecutive Crosstown League championship.

Coach Chris Guastella molded the Stars into a team of destiny, as they won 17 games, winning their first Santa Fe League championship in five years, and advancing to the second round of the CIF-SS Division 5 playoffs. Current junior Victor Garnier, the 2016 San Pedro News Pilot Prep Boys Soccer Player Of The Year, was a scoring machine, as he scored a phenomenal 45 of Mary Star's 74 goals during the season. Graduated Santa Fe League Goalie Of The Year Nick DiLeva was also tough to score upon, as he was a guiding force for the Stars all season long.

It's not just becoming commonplace for San Pedro High, but it also seems like it's their birthright. Coach Bruce Thomson would once again produce championship success in the Marine League for San Pedro boys and girls cross-country, and both would also make another run at CIF-LACS dual championships, with the girls finishing third behind eventual champion Palisades, and the boys placing fifth. Junior girls cross-country runner Maya Richardson was the only cross-country runner to advance to the CIF State Meet in Fresno.

Also in 2016 there were some teams that found championship success via regular season tournaments. San Pedro High girls volleyball hosted their inaugural San Pedro Invitational Tournament on September 24, and would win five matches in one day, culminated by a thrilling comeback in a three-set victory over Estancia of Costa Mesa in the Gold Division championship match. Tournament MVP Lauren Sutrin and all-tournament selection Sara Peterson were brilliant along with senior setter Katie Bentovoja. San Pedro girls soccer would repeat as Lady Pirate Cup champions on December 9, and on Friday, Mary Star girls basketball claimed their second straight Firebaugh Tournament crown with a 39-15 victory over Hollywood, as Pisano scored 24 points for the Stars in sharing the MVP award with Hanalei Emnace.

Look for the new year of 2017 to be just as good, and likely better to the Pirates, Stars and Polar Bears.

No negative comments on ANY of my blogs... or that's immediate grounds for being blocked. Thank you for understanding. NO HATE ALLOWED ON ANY OF MY BLOGS in regards to ANY of the sports teams in my hometown, ESPECIALLY my alma mater.