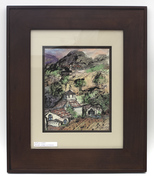 California architect and artist Thomas Hatch will exhibit his art for the first time at The Loft in San Pedro on Thursday, September 5, 2013, during the First Thursday Art Walk. Hatch scored the opportunity with help from John Chiu, a member of the Palos Verdes Art Center, and Angelica Sotiriou, a well established artist who has a studio in The Loft. Sotiriou, who has been exhibited in several California museums and has her art displayed at the Terranea Resort in Rancho Palos Verdes, will share her space with Hatch in The Loft that day to help promote his first showing.

Thomas's  paintings are a mixture of landscapes, people and buildings. His style has been labeled as realistic/surreal with mixed media of ink, water color and acrylic. In his youth, Hatch’s style closely resembled Van Gogh, with vibrant colors and broad strokes. However, after graduating Architecture School, his style was more architectural renderings with water color added. Over the years,  Thomas melded the two worlds of linear high contrast with his own sense of artistic vision. He uses a four day process consisting of line work and drafting, acrylic blocking, water washing and water marking, and black ink cutting and trimming. “The ink gives buildings and landscapes their strength - water color adds harmony and lightness - and acrylic provides energy,” according to Tom.

His vision is that people will feel the personality, mystery, and energy that he sees when painting a 1920’s house in San Pedro, an old historic post office in Ojai, a town hall in Delft, a winery in Napa Valley, or a marsh at dusk. According to Hatch, “Buildings, landscapes and people showcase untold stories and awe.” Another piece Hatch hoped to display is a brass rubbing he created while being mentored as an artist in Holland. The original brass plate was constructed by village craftsmen for an Abbey in Belgium in the 14th century. Unfortunately, that piece was recently stolen, so a replica print of the rubbing will be displayed instead.

Thomas was raised in Rancho Palos Verdes and then attended Arizona State University where he received his Architect degree in 1979. He is currently working as an architect and artist in Ventura County. His work will be shown on the second floor main area at The Loft, located at 401 S. Mesa Street in San Pedro from 6-9 pm. There will be appetizers, wine, sodas, and music. His mother and sister will be there to represent his art.  The music will be provided by Los Angeles Harbor College which was Tom's alma mater for undergraduate studies.  Twenty-five percent of all the proceeds from the sale of Hatch’s art will be donated to Harbor Interfaith Services of San Pedro, a large organization which supports, shelters and feeds homeless families.

The First Thursday Art Walk is a congregation of several galleries along 7th Street and Mesa in conjunction with The Loft on Mesa and 4th Street that open their studios up to the public from 6-9 PM, on the first Thursday of every month. The Loft is an old 1900’s warehouse that was used as a laundry for the ships docking at the port. Now, it has become a co-op of approximately eight  eclectic artists from around the area who use The Loft as their studio. There are a number of excellent restaurants in the four block vicinity that participate also and offer live music. For more information about Hatchs' exhibit, contact (703) 362-3951

From arriving on the grass of Mike Walsh Pirate Stadium all the way to the final chant when it was over, this Friday night, was unlike any other night in the annals of San Pedro High football.The Golden Pirate Regiment band wasn't around, nor was the Drill Team, not to mention both sides of fans were smaller than usual. Yet, Pirate Pride was still very much alive and well…See More
Saturday
0 Comments 0 Promotions

729 days.That's how long San Pedro High softball had to wait to play at home on campus, even if there was not a lot of people there to see the game.May 1, 2019 was the last time the Pirates played at the Jim Robertson Memorial Field, a run rule Marine League victory over Rancho Dominguez Prep. San Pedro was never able to enjoy the fruits of playing on their own campus in…See More
Apr 30
0 Comments 1 Promotion

WILMINGTON - 508 days... added by fourteen more days.That's exactly how long it has been for San Pedro High football to showcase themselves on the gridiron.November 25, 2019 was when the Pirates previously played. The entire Fall semester of 2020 was void of high school football in California due to the coronavirus (COVID-19) pandemic. The Los Angeles Unified School…See More
Apr 24
0 Comments 0 Promotions

Donald George Ezell, beloved husband, father, grandfather, great grandfather, friend, uncle, brother n law, cousin and Pastor made his grand entrance, most likely sprinting into heaven on April 9, 2021 after a 4yr battle against AL Amyloidosis. Don, aka Pastor Don, loved and knew Jesus personally and desired that all would know Him as he did. As pastor of Harbor Christian…See More
Apr 23
0 Comments 0 Promotions

After a one-year absence, the All-San Pedro News Pilot Prep Boys Soccer Team is back, with a vengeance.Two years ago, San Pedro High boys soccer won the CIF-Los Angeles City Section Division 4 championship via a shootout with University of Los Angeles. The young man who made the final penalty kick in the shootout, was a sensational sophomore by the name of Billy Lopez,…See More
Apr 22
0 Comments 0 Promotions