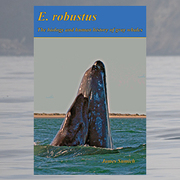 The gray whale is, at the same time, a species with an extinct population, a critically endangered population, and a population brought back from near extinction to become the first cetacean to be removed from the US Endangered Species Act as recovered. It is also a species that has demonstrated remarkable adaptability in the face of a rapidly changing environment. In his talk, Jim Sumich will discuss the past and current distributions, migrations, and genetics of gray whales, and some likely future scenarios for this species in the in the context of our changing climate.

Jim is the author of a best-selling textbook on marine biology (now in its 11th edition) and co-author of the widely adopted “Marine Mammals: Evolutionary Biology.” He has taught marine mammal biology at the college and university level for more than four decades and has conducted research on gray whales from British Columbia to Baja California. Jim currently holds a Courtesy Faculty appointment at Oregon State University’s Hatfield Marine Science Center. He has been a long-time friend to ACS (he was guest editor of the Whalewatcher issue on gray whales) and has recently published a general audience book “E. robustus: The Biology and Human History of Gray Whales.”

A book signing will follow the presentation and copies of “E. robustus” will be available for sale.

RAFFLE: We will have a fun and exciting raffle at the end of the presentation. Tickets will be for sale at the meeting and all who attend the dinner will receive a free ticket.

The talk is free and open to the public, held at the Cabrillo Marine Aquarium, 3720 Stephen M. White Drive in San Pedro.

Meet the speaker for a relaxed, no-host dinner at Puesta del Sol (1622 S. Gaffey, San Pedro). Dinner is from 6 p.m. to 7 p.m. Receive a free raffle ticket by attending the dinner.

ACS-LA Monthly Speaker Series is held at 7:30 p.m., the last Tuesday of the month, from September through May each year in the John M Olguin Auditorium at the Cabrillo Marine Aquarium.

LONG BEACH - On Thursday, the San Pedro High girls volleyball team accomplished something few could do in recent years, and that's a Marine League championship.By virtue of defeating host Rancho Dominguez Prep 25-10, 25-10, 25-12 in their regular season finale, the Pirates clinched an automatic share of their first league title in the Fall semester since winning five…See More
Friday
0 Comments 1 Promotion