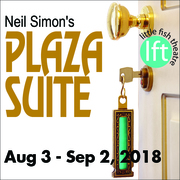 A story about Suite 719 at the infamous New York City Plaza Hotel and the people who inhabit it: a not-so-blissfully married couple, a movie producer and his old flame, and a nervous bride and family.

In the first act entitled “Visitor From Mamaroneck,” we meet the not-so-blissfully wedded couple Sam and Karen Nash. In an attempt to bring some fire back to their relationship, they are revisiting their honeymoon Suite. But their plan backfires when Karen learns some not-so-savory news about her husband. “Visitor From Hollywood” is the second act, bringing movie producer Jesse and his old flame Muriel, a suburban housewife, together in the Suite for an interesting and enlightening reunion that neither of them expect. The third act, “Visitor From Forest Hills,” revolves around Roy and Norma on their daughter Mimsey's wedding day. In a rush of nervousness, Mimsey has locked herself in the Suite's bathroom and refuses to leave. Chaos ensues as they frantically attempt to cajole her into attending her own wedding while the gathered guests wait downstairs.