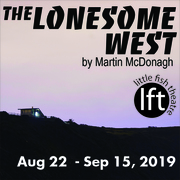 In this dark comedy written by the Academy Award Winning Writer/Director of In Bruges and Three Billboards Outside Ebbing, Missouri, Valene and Colman are brothers residing in the far reaches of rural west Ireland. Their father’s recent death finds them alone together in the family house, frequently and violently fighting over everything from potato crisps to poteen, and most importantly, over their inheritance. Add in a rumor about town that one of them may have murdered the father over a haircut-related insult, a local parish priest who tries desperately to save their souls, and a young girl who is their bootleg whiskey supplier, and you get a play that is both intensely hilarious and viscerally gripping.

RSVP for THE LONESOME WEST at Little Fish Theatre to add comments!