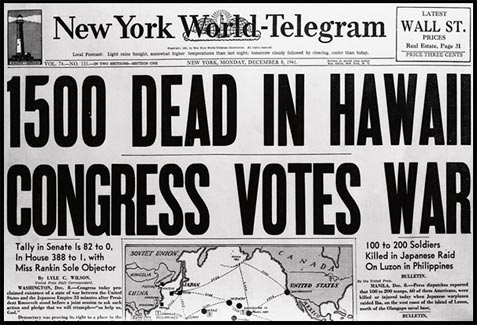 READ THIS TODAY & HONOR OUR MEN BY REMEMBERING!!!

Seventy-two years ago today, 353 Jap airplanes, 45 of them Mitsubishi Zeros with kamikaze pilots, attacked the Pacific Fleet at Pearl Harbor. It was 7:53 Sunday morning and while children were at Sunday school, the evil Jap forces commenced their attack upon Hawaii, killing 2,403 Americans and wounding 1,282 others. The heinous sneak attack took out a large portion of our Pacific Fleet. Often overshadowed by the enormity of Pearl Harbor were the Jap attacks on The Philippines, Hong Kong, Guam, Malaysia, Wake and Midway Islands on that same devastating day in the Pacific. Despite significant destruction of our Pacific Fleet, American forces regrouped and in six months time engaged the enemy in the Coral Sea where we stopped Jap expansion into the South Pacific. One month later we lit up the enemy again at Midway where their retreat home from the Central Pacific began. Meanwhile in the Southwest Pacific, 15,000 of our boys (and 60,000 Filipinos) were being tortured and starved in the Philippines. The Jap invasion of the Philippines on December 22, 1941 stretched U.S. resources to the breaking point and resulted in the American surrender of April 9, 1942. After months of isolation and severed links in the supply chain, our forces simply ran out of ammunition, etc. which led to the infamous, atrocious and inhumane 65 mile Bataan Death March began. Those who survived (25%) the savage march and brutal treatment of the POW Camp O'Donnell were herded onto Hell Ships for transport to Japan where as many as a thousand men were thrown into a single hold. With little or nothing to eat and being on the brink of starvation, death and disease were rampant among our men who were forced to lie in each others urine and feces. The dead were not reported to the Japs and left to rot along side the living so that their minuscule food rations would not be reduced any further. The Jap treatment of our soldiers in the Philippines was worse than any concentration camp in Europe. Death was often the only escape from the inhumane torture but that was not an option for the brave soldiers who survived the evil ordeal. 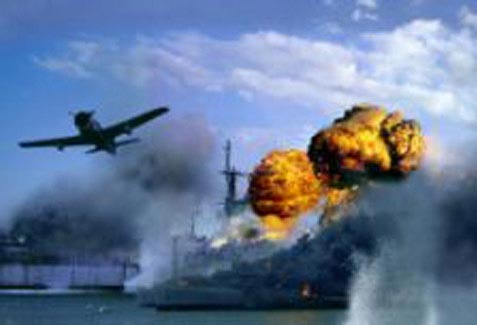 Four months after the fall of the Philippines in August of 1942, we engaged the enemy in The Battle of Guadalcanal (Solomon Islands) in the first major offensive of the war. An American victory here would cut off a significant jap supply route and by February of 1943, after heroic invasions by U.S. troops and a historic Naval battle, 25,000 japs were killed and the enemy retreated with their tails between their legs to one of their last Pacific strongholds, New Guinea. 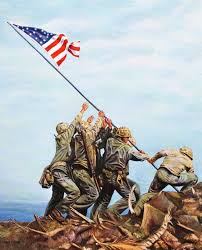 Our forces had now contained the japs and with the help of Australian forces, we isolated them on New Guinea and took several surrounding islands. By the summer of 1944, after numerous decisive victories, we were in a position to retake The Philippines. We landed at Leyte in October and in six months, following the largest naval battle in history, The Philippines were liberated from the evil imperial jap invaders. MacArthur had returned. With The Philippines well on her way to being secured, we focused our sights on the jap homeland. The two largest obstacles on the path to the evil empire were Iwo Jima and Okinawa. In February 1945, 74,000 Marines landed on Iwo Jima and following a month of the bloodiest battle (to that point in the war) in The Pacific, Iwo Jima was ours. It wounded 19,000 and took 7,000 American lives to accomplish the iconic raising of the flag and kill 20,000 japs. The volcanic sand on the island made superb cement which the japs used to fortify bunkers and build over 15 miles of tunnels. After nine months of aerial bombings and some of the fiercest fighting of the war, in March of '45 we expelled the enemy vermin from that tiny island in The Pacific and moved on to Okinawa. 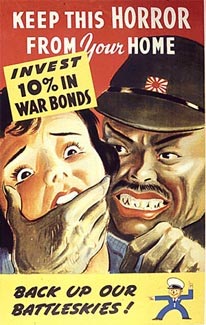 The loss of lives during the Battle of Okinawa make it far and away the bloodiest battle in The Pacific. It lasted over 80 days and took 12,500 American lives and wounded 36,000. The japs lost over 100,000 troops and an estimated 75,000 civilians. More people died on Okinawa than in Hiroshima and Nagasaki combined. The loss of American life in Okinawa was one of the determining factors in Truman deciding to drop a couple A-bombs rather than invade japan. A potential invasion of japan was estimated to cost a half-million American lives and millions of jap lives, so the decision to drop the bomb was a benevolent one that saved millions of civilian lives. Thus, the icing on the cake for America after being attacked by a savage foe at Pearl Harbor on December 7th, 1941 was the glorious take-off and flight from a Tinian runway of The Enola Gay, piloted by Colonel Paul Tibbets, and the destruction of Hiroshima and Nagasaki by dropping the first and well deserved atomic bombs in history.

To date, we are the only nation to ever have used a nuclear bomb and don't you U.S.A. haters ever forget it....because we have a few ready to launch with your names on them! If there are any questions, then send them to Tokyo and ask them how PEARL HARBOR worked out for them.