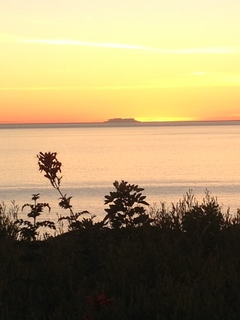 The visibility was so fantastic on Monday, January 6 that I saw a "new" island. New for me at least! It was clearly visible from 38 miles off the coast of Palos Verdes.
At first I thought it was a ship but it did not move. Then I thought it might be a Google barge but I had not heard anything about that in the news. Plus it was fairly large-ish for a ship.
Turns out, it is the smallest island of the eight Channel Islands and it's called Santa Barbara. It is the southernmost island in the Channel Islands National Park.
Needless to say I took a bunch of photos as the sun went down.

I remember seeing it years ago awesome picture