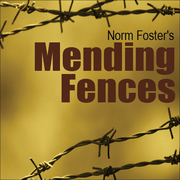 It’s been thirteen years since Drew has seen or talked to his father, Harry. But marital upset in Drew’s life drives him to make the 32 hour trek to visit and seek answers from the man who shaped his life. He meets Harry's girlfriend Gin, who tries to help them mend their strained relationship. Set in a farmhouse in rural Saskatchewan, flashback scenes delve into the past events that shaped their tenuous bond. As the play unfolds, Drew and Harry tentatively discover that they have more in common than even they realized.