There wasn't a single league champion to be found for San Pedro Prep Girls Volleyball in 2018, as San Pedro, Mary Star and Port Of Los Angeles all came up second best in their respective leagues, yet the Pirates had the more definitive playoff run out of all of them, as they came out as CIF-Los Angeles City Section Division 1 champions.

San Pedro returns plenty of talent to try and do it all over again for 2019, but waiting in the wings for the Pirates' season and home opener on August 26, is the school who returns the most talent in Camino Real League runner-up, and fellow city neighbor Mary Star Of The Sea, who also has high aspirations. It's the highly anticipated rematch from three years ago, when the Stars defeated the Pirates in four sets at Mary Star High in 2016.

Meanwhile, Port Of Los Angeles, although finishing with a winning record and coming up several five-set thrillers short of an Imperial League championship, still missed the CIF-LACS Division 4 playoffs in 2018 for the first time ever.

Who will make the biggest splash at the net for 2019? Here's the first serve on all three teams.

SAN PEDRO (26-6 overall, 7-3 in Marine League in 2018) - It was a marvelous run for San Pedro in 2018, as they won their own San Pedro Invitational Tournament for the second time in three years, finished in a tie for second in the Marine League with Narbonne behind nine-time champion Carson, earning the top seed of CIF-LACS Division 1 and justifying that lofty position by defeating El Camino Real in four sets for the championship.

Now in his sixth season, Christopher Ceballos comes stacked with another team eager to build off that title run, taking dead aim at the Colts' in pursuit of their first Marine League title since 2009, also the last time the Pirates managed to defeat Carson.

Senior outside hitters Alexis Avitia (top picture) and Isabella Emerson are destined to break out, while the Pirates return not one, but two All-Marine League setters in junior Gabriella Edwards, and senior Rosie Lopez, who sat out last season. Avitia and Emerson played massive roles for San Pedro in the playoffs, which ended with a loss to Beaumont in the CIF Southern California Regional Division 4 playoffs.

Not to be outdone, San Pedro has three new faces on the varsity scene that has won Marine League titles at both lower levels ready to make their presence felt in junior middle blocker Adamaris Vega, and junior outside hitters Cassidy Espinosa and Alyson Watson. Senior Georgie Smith will now take over as the starting libero to compensate for the graduation loss of Gurrola.

San Pedro has a stacked nonleague schedule as they will take on the likes of CIF-LACS Open Division runner-up Taft, Eagle Rock, CIF-Southern Section power El Modena, Bell (whom the Pirates defeated twice in 2018, including the CIF-LACS D-1 semifinals), North Torrance and the next team in this preview... 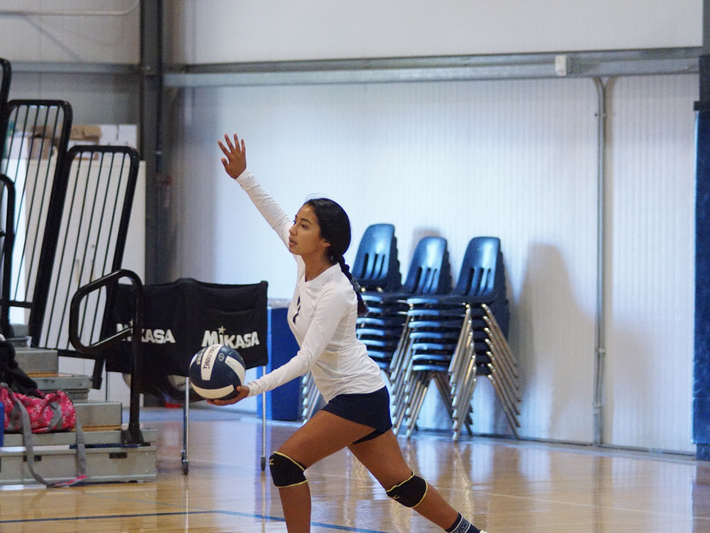 A trio of gifted all-league juniors in outside hitters Sammie Sabra and Serena Ramirez (pictured), along with setter Lily Ruggiero will make for a deadly pass/attack combination, which will make life miserable for the opposition trying to contain them. Sabra is the returning kill leader of all three schools, posting five 20-kill outings. Ramirez is an Arizona verbal commit for beach volleyball and has an incredible vertical, with great instincts to match. Ruggiero is a two-time all-league setter and has a sensational jump serve.

Other players to watch out for includes senior all-league opposite hitter Marina Erosa, and talented sophomore middle blocker Marlena Rivera.

Mary Star only lost twice in league play to champion Bishop Amat of La Puente, who enters as the favorites again, but the Stars pushed Bishop Amat to four sets both times, and Sabra posted 26 kills in one of the two meetings.

POLA (7-6 overall, 5-3 in Imperial League in 2018) - The Imperial/Coliseum League connection has flip flopped for the 2019 girls volleyball season, and now the Polar Bears compete in a traditional six-school format. No longer are they chasing Dymally for league supremacy as the revamped Coliseum League switch now sees POLA competing with last year's CIF-LACS Division 5 runner-up Dorsey, along with Fremont, King-Drew, David Starr Jordan and Augustus Hawkins.

Brian Justiniano is now in his second season as coach, and he will rely heavily on senior middle blocker Kaylen Scott and junior outside hitter Lauren Brown to carry the load. Other key players for the Polar Bears are senior outside hitter Arelyz Martinez and senior opposite hitter Quitze Gastelum.