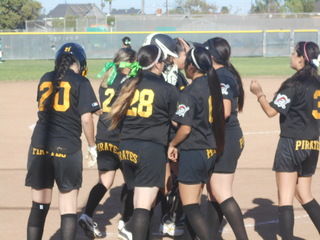 TORRANCE - It was almost something you'd normally do with regularity if it was a video game.

Except this was real life.

San Pedro High softball senior catcher Armida Roman came up to bat in the top of the fourth inning with one out against host South Torrance just looking to keep the inning going, but with the count 3 balls and one strike, she didn't want to draw a walk like she did her previous time up. So Roman just came up swinging.

And the rest... along with her next two plate appearances, would be history.

Roman would have every high school softball player's dream, not only connecting on the next pitch she saw for a booming solo home run, but she would do it again, and again, for a trio of home runs in one game, and the Pirates would need every bit of Roman's mighty power as they thwarted a last-inning comeback attempt from the Spartans to win, 8-7 in a wild intersectional showdown.

"It was amazing and exciting," Roman said of her awesome performance. "It was long overdue and I'm happy to help my team."

"I was locked in and wanted to score Doreen," said Ezelle, who went 3-for-4 on the day.

After Roman's first home run, South Torrance (1-4), who had lost 6-0 to San Pedro on March 5 in the Redondo Tournament which had started the Pirates' current win streak, would score two runs in the bottom of the fourth inning to cut their deficit down to 3-2, but Roman would once again strike in the sixth inning.

Senior pitcher Jocelyn Kondash reached on an error to lead off the top of the sixth, then Roman would immediately make the Spartans pay on the very next pitch, drilling a crucial two-run home run which jump started a four-run inning that put San Pedro ahead, 7-2. The inning also included Corella scoring a third run off a passed ball, then junior third baseman Taylor Richter laced a two-out single to right field that plated senior first baseman Katrina Herrera.

However Roman was not through yet...

Even a pitching change wouldn't be the answer to South's problem, as Roman drilled the second pitch she saw over the left field fence for the record-setting third home run. Roman's approach in this at-bat never changed, and she didn't even think about hitting it out to make this at-bat all the more remarkable.

"I just wanted to get a simple hard hit," Roman said. "As (assistant coach) Doc (Allen) always tells me, start my hips and shoulders early and end strong."

Yet, the 8-2 San Pedro lead possessed after Roman's third round-tripper was not even close to being safe, as the Spartans would score five runs in the bottom of the seventh, highlighted by a bases-clearing one-out triple by Georgia Benoit, and a two-out solo home run from Jazmine Stokes, to make the Pirates sweat harder before junior left fielder Chase Wong's catch in the outfield finally ended the game, and added to the streak, two batters later.

"I think we're playing exactly how we should be playing," said Corella, who finished 3-for-3 with three runs scored for San Pedro. "We still have some things to adjust that even with an eight-game winning streak, as long as we make our adjustments, we will get better. I think this winning streak won't be dying down any time soon  and no one should count us out."

Especially if Roman's bat never loses its power after her long ball barrage.

"I thought that was pretty impressive to watch," Corella said of Roman's three-home run display.