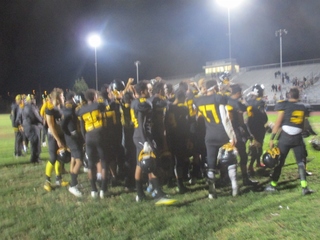 After blowouts were the norm in the opening round where a running clock was needed, even in Division I which included San Pedro High football disposing of Birmingham, 49-0 in their opener, change was right around the corner.

So after 90% of the coaches from all over the section were in favor of it, the Open Division playoffs was created.

Three years ago, the CIF-LACS added the Open Division for boys and girls basketball where schools ranked in the top eight regardless of their set division, would be selected. Last year, the Open Division was also implemented in girls volleyball with the same kind of format. In Divisions I, II and III last season, 17 of the 24 first round football games didn't end without a running clock due to blowouts.

However, the Open Division playoffs for football is basically to shift the balance somewhat in Division I.

Here's how it all pans out.

There are 24 Division I schools, including San Pedro. The top eight ranked teams in Division I will be entered into the Open Division, while the remaining 16 schools get automatic entries into the Division I playoffs. Divisions II and III will remain a 16-team playoff format along with Division I.

As of now, three-time defending CIF-LACS Division I champion Narbonne of Harbor City and last year's runner-up Dorsey of Los Angeles look like two prime candidates to be in the Open Division, and then the next six spots are definitely up in the air with several teams, including San Pedro, Carson and Banning of Wilmington from the Marine League, looking to vie for those last six spots.

Now as for what happens at the end of the year...

The CIF-LACS is guaranteed three automatic berths to the CIF State playoffs. The three entries will be decided upon the conclusion of the Open Division championship game on Saturday, December 2.

Here are the different scenarios:

 If the Division I champion defeats the Open Division runner-up during the regular season, then the Div. I champion would go along with either the Div. II or III champion.

The 2017 prep football season where it all begins to unfold... starts on Friday, August 25.

Springtime is in the air. Time once again to get your lineup cards.San Pedro Prep Baseball & Softball for 2020 will be at a fever pitch with tons of potential all around San Pedro, California, with none greater potential more than that of San Pedro High baseball. With all but three players back from last year and the addition of an impact transfer, the Pirates are…See More
3 hours ago
0 Comments 0 Promotions