The Draft Environmental Impact Report/Environmental Impact Statement (EIR/EIS) for the Clearwater Program has been released today. The extended public review period begins today and ends on April 10, 2012. In a nutshell, the Sanitation Districts of Los Angeles County wants to build a new onshore tunnel and ocean outfall so that the current tunnels can be inspected and repaired if necessary. Construction would begin in 2016.

There are four alternatives being considered.

The two options that would affect coastal San Pedro residents the most are options #3 and #4. These are also the least expensive options.

Alternative #3 at Angels Gate would have a 20′ noise barrier. During construction of the shaft, approximately 10 to 40 trucks per day would be required for delivery of supplies and removal of excavated material. Shaft construction would take about 8 to 9 months. 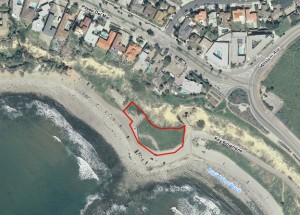 Alternative #4, the Royal Palms option, is the recommended alternative. It would consist of an average of 10 trucks per day (about 40 trucks per day maximum) for 6–9 months during the shaft construction. There would be approximately 5 to 10 construction workers on site for a 10-hour shift per day, 5 days per week, for approximately 2 years to construct the exit shaft, manifold, valves, and piping interconnections. Demobilization of the site would take about 3 months.

You can read the Draft EIR/EIS in its entirety on the Clearwater Program website.

The Sanitation Districts will be conducting two public hearings to receive comments on the draft EIR on:

The Sanitation Districts and the Corps will hold a joint public hearing to receive comments on both the draft EIR and draft EIS on: