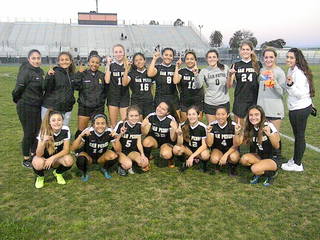 Year after year, the Pirates know that whenever they have a chance to clinch a Marine League championship, they always end up having to go through rival Narbonne of Harbor City one way or another. For the third consecutive season, San Pedro would clinch the outright Marine League championship on Gaucho soil, with a 3-0 victory that seemed like no problem on the way to an astonishing thirteenth straight league crown.

The Pirates (16-3 overall) would dominate league competition en route to a 66-0 stroll in ten games combined against the Gauchos, Banning of Wilmington, Carson, Gardena and Washington Prep of Los Angeles.

Just two minutes into the game, freshman midfielder Kylie Danelo lofted a corner kick towards the net, it got deflected by a Gaucho defender and somehow bounced over the goalie's head into the top right corner and in for a 1-0 San Pedro lead. The Pirates kept the pressure on in forcing six corner kick chances, but was not able to finish any of them. Senior goalie Carly Luna wouldn't be threatened at all as the defense stood tall in preventing any breakaway chances.

After a foul outside the 18-yard box, in stepped Danelo again, as she blasted in a perfect 20-yard free kick well out of the goalie's reach into that same top right corner of the net in the 39th minute, and the Pirates would take a 2-0 lead into halftime.

The final goal of the game belonged to San Pedro junior midfielder Samantha Martinez, who continues to have a spectacular season.

Six minutes into the second half, sophomore midfielder Renee Ketner booted a perfect lead pass to Martinez for a clear breakaway, then easily tapped a reverse cross shot past the goalie for her 27th goal of the season. Then the combined defensive effort of freshman Mila Miguel, sophomores Sarai Penelonzo, Riley & Grace Cameron, not to mention added assistance from Danelo, senior midfielder Kenia Torres, junior defender Reyna Salas and others, was enough to protect Luna, who only needed three saves.

Once the final whistle blew and the postgame handshake concluded, the Pirates engaged in a rousing 'Who's House, P-House' chant along with the junior varsity team, as they too won their Marine League title earlier in the day.