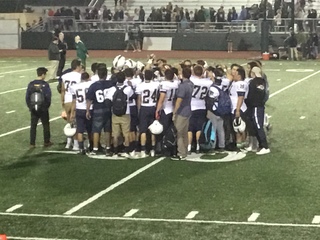 TORRANCE - The first half looked like host South High of Torrance was closing in on their first victory of the 2018 season and even the public address announcer had a freudian slip saying 'at halftime, the final score is...' when the Spartans held a 13-3 lead over visiting Mary Star.

The Stars, however, had other plans in mind for the final outcome.

Even losing a fumble off a bad snap in which South recovered and returned 22 yards for a touchdown on the second play of the third quarter would not rattle the cages of the Stars, as they responded by scoring 20 unanswered points on the strength of three touchdown passes from senior quarterback Kevin Costa and a spirited defense that registered five takeaways, and Mary Star prevailed with a come-from-behind 23-20 nonleague victory over the Spartans.

Costa's third touchdown of the night, a 28-yard touchdown pass to junior wide receiver Isaac Colloca - the second time they hooked up for six in the game - with 6:42 remaining in the game propelled the Stars (4-0 overall) to remain unbeaten after four games thus far in the 2018 season.

The real 'Star' - no pun intended - of the night, was a relentless, in-your-face, suffocating Mary Star defense.

Making impact early, senior RB/LB Luke Sabra recovered a fumble on the game's opening possession for Mary Star, but the Spartans (4-0) would score on their next two possessions with a pair of touchdown passes to take a 13-0 lead at the end of the first quarter. The Stars' offense came slow out of the gate but provided points on their first possession of the second quarter on Noah Guastella's 21-yard field goal.

Mary Star's offense continued to struggle as junior WR/LB Marco Ibarra punted five times after a three-and-out, but then again, South's offense failed to produce for the remainder of the half.

After Costa's lost fumble off a snap in the third quarter led to six points for the Spartans, the offense finally came to life when Costa drove the Stars downfield in a drive that ended with Costa's first scoring strike, a 13-yard touchdown pass to Ibarra to cut South's lead to 19-9 as the two-point conversion failed. On the Stars' next possession, Ibarra was forced to punt yet again, but Mary Star, and Costa, got a gift in the form of a muffed punt, which Costa recovered.

Given new life once again, Costa would throw a beauty of a 22-yard pass to Colloca which he caught in the back of the end zone for a touchdown that cut the Stars' deficit down to 19-16 with three minutes left in the third quarter.

Once again the Stars' defense came up clutch to force a punt at the start of the fourth quarter, then the offense engineered a 12-play, 68-yard drive that culminated with Costa's 28-yard touchdown pass to Colloca, as Costa pump faked before finding Colloca wide open with a perfect deep spiral. Then after surrendering one first down, a huge sack on fourth and nine with just under four minutes left to play from junior linebacker Jordan Fajardo would force South to turn it over on downs.

There was one more big play for Costa to make, and on third-and-long, he delivered a 25-yard pass to senior WR/LB Joe James for the first down with 1:08 to play, allowing Mary Star to run out the clock and survive victorious.

Costa was money when the Stars needed him, but the defense was on point, especially after the rugged first quarter.

Fajardo had three sacks on the night, Costa, Sabra and sophomore Adam Turbide all recovered fumbles, while junior defensive back Andy Vega and senior defensive lineman Josh Fennessey each intercepted a pass for Mary Star, who will travel to Village Christian, a 42-14 winner over Boron, next Friday.