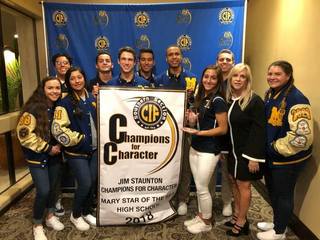 Although Mary Star Of The Sea High School is still pursuing its first-ever CIF-Southern Section sports team championship in its 64-year history, they were given the next best thing by the section last week.

All student athlete winners were awarded $1,000 scholarships plus an added bonus, a card for free Raising Canes chicken for an entire year.

The 2017-2018 school year was one of the best Mary Star had for sports, with the softball team reaching the CIF-SS Division 6 championship game on June 1 as the biggest achievement. Boys basketball, softball and girls volleyball were all league champions, while the boys and girls basketball teams both made long playoff runs (boys Division 4-A quarterfinals and girls Division 5-AA semifinals).