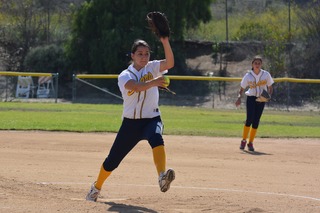 The third time was definitely the charm, and a relieving one at that for Mary Star High softball.

March 18 and April 3 were painful days for the Stars in dealing with Camino Real League rival Cantwell Sacred-Heart of Mary from Montebello, as Mary Star would score first in both games, only to have the Cardinals rally off mistakes to win two twin games that have them in first place with two league games left, where only one win can end the Stars' three-year reign as league champion.

The Vitalich sisters of Marina and Amanda along with the rest of the Stars would not allow Cantwell to get the three-game sweep of the series, let alone on Mary Star's senior day in their final home game of the 2014 season at the San Pedro Softball Complex.

Another VINTAGE outing in the circle by junior pitcher Marina Vitalich, combined with a stellar hitting day from freshman shortstop Amanda Vitalich, Mary Star got just enough to finally get the best of Cantwell, 3-0 to deal the Cardinal their first league loss in a battle between two Top 10 ranked teams in CIF-Southern Section Division VI.

"This was a big win for us," said Marina Vitalich, who threw a masterful two-hit, complete game shutout with 17 strikeouts, which surpassed her own school pitching record for strikeouts in a season, which now stands at 252 on the year. "We let Cantwell sneak two wins from us earlier this year, one in nine innings (5-1 on March 18) and one in the last inning (6-1 on April 3). I'm very proud of our team and how we fought today."

Marina and junior shortstop Lexie Geich started off the bottom of the first by drawing walks, then Amanda Vitalich stroked a single to left field, loading the bases.  One out later, senior second baseman Emily Buczko hit a grounder to second but the Cardinals failed to retire Marina, who scored as Cantwell senior catcher Anissa Loera failed to touch home plate on what appeared to be a shot at a 1-2-3 double play.

Buczko was still thrown out at first, but the Stars took the seemingly customary 1-0 lead they tend to get against Cantwell.

However, on this exchange, the Stars finally gave Marina some well-needed insurance.

Amanda Vitalich blasted a one-out single to left in the bottom of the third inning, followed by freshman catcher Gianna Fletcher being hit by a pitch. Buczko's sacrifice bunt moved both runners into scoring position, then comes senior center fielder Sarah Pearson hitting a hard ground ball to third base.

Cantwell senior third baseman Alexis Pintado threw high over first base that allowed both Amanda Vitalich and Fletcher to score and give the Stars a 3-0 advantage.

Marina Vitalich had held Cantwell to no hits through four innings before a one-out single in the fifth inning, but was able to get out of that threat with a strikeout, leaving runners on first and second. Vitalich also struck out Loera, a Cal State Fullerton commit, three times. Marina escaped one final threat by the Cardinals in the seventh inning as they put two runners on yet again with two outs, but her 17th strikeout that followed ended the game.

This victory for Mary Star came in a big battle, as the Stars were ranked No.6 in the recent CIF-SS Division VI poll, while Cantwell, who went 4-1 in the Las Vegas Spring Jamboree Tournament over spring break, which included a eye-opening 12-6 win over CIF-Los Angeles City Section Division I power Banning of Wilmington, was ranked fourth.

"It was great beating our rival," said Amanda Vitalich, who went 3-for-3 with a run scored for Mary Star. "They have been playing great so we knew we had a tough game again with them."

With only two guaranteed spots in the Division VI playoffs out of the Camino Real League, this was a gigantic victory for the Stars, who are one game behind Cantwell, and two games ahead of St. Monica of Santa Monica so Mary Star knows a third victory each over both the Mariners and last place Serra of Gardena basically seals up a playoff spot and maybe a probable first round or wild card game at home.

"Cantwell is our biggest rival so this win means a lot to us and hopefully gives us more momentum for the CIF playoffs," Marina Vitalich said.