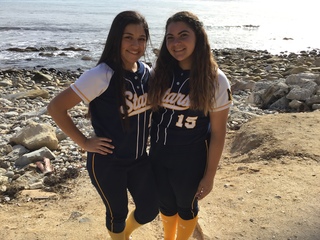 Thanks to a long run which ended on June 1 in a CIF-Southern Section Division 6 final, the two most critical players of Mary Star High softball making that incredible run got rewarded with a rare postseason honor.

Sophomore pitcher Alessandra Samperio, the 2018 San Pedro News Pilot Prep Softball Co-Player Of The Year, and sophomore shortstop Ashley Rico, a San Jose State verbal commit, were both named All-CIF Southern Section Division 6 as Mary Star was one of only two schools in the division that got two All-CIF selections.

Samperio was the top pitcher of all San Pedro-based high schools, going 20-7 in the circle with a 1.52 ERA and 274 strikeouts while also hitting .400 with two home runs, 25 RBIs, 30 hits and seven doubles en route to being named the Camino Real League Pitcher Of The Year. Rico batted .512 with 4 home runs, 19 RBIs, 43 hits, 32 runs, ten doubles and 13 stolen bases for the league champion Stars.

The duo of Samperio and Rico join the boys and girls basketball tandem of senior-to-be Joseph Octave and the recently graduated Hanalei Emnace as the only other All-CIF selections at Mary Star High for the 2017-2018 school year and first All-CIF softball duo since sisters Marina (four-time All-CIF selection) and Amanda Vitalich in 2014.