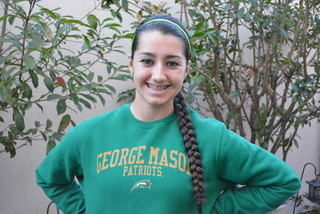 There hasn't been a prep softball pitcher in San Pedro that has garnered more prestige, and struck out her fair share of batters, than Mary Star High junior sensation Marina Vitalich.

Even though she still has two more years to go, which is a frightening disposition for the Camino Real League and all future Stars opponents, Vitalich made another pitch, a verbal one, on November 11, which was on of all days... Veteran's Day. The two-time Camino Real League Pitcher & Player Of The Year, and two-time All-CIF Southern Section selection, made a verbal commitment to play softball for George Mason University in Virginia.

"All her hard work over the years has paid off," Mary Star softball coach Gregg Aguilar said. "It is amazing the number of hours she has dedicated to mastering her craft."

Vitalich is the first prep softball player in San Pedro since current sophomore at Oregon, and San Pedro High alumni Koral Costa, to commit early to a college before their senior year, and just the second athlete in Mary Star history to make an early commit.

"I love the Washington DC and Virginia area," Vitalich says on heading to the East Coast. "I don't mind the cold at all. I pitched in 35 degree weather and did fine."

Vitalich, the 2012 San Pedro News Pilot Softball Player Of The Year and 2013 News Pilot Softball Pitcher Of The Year, would set individual pitching records for Mary Star in her freshman season of 2012, as she finished with a record of 19-5, a 1.54 ERA and 215 strikeouts in 149 innings pitched. Vitalich also tallied three-no hitters for the Stars and had pinpoint control with all her pitches, walking only 37 with five hit batters.

Once her freshman season ended, her Patriot-ic target to her eventual interest in George Mason would begin.

In October of 2012, Marina and her travel ball team the Firecrackers 18 Gold played in the Ronald McDonald College Showcase in Houston, Texas. During the weekend trip, George Mason softball coach Joe Verbanic watched Vitalich pitch and was so impressed he contacted Marina's private coach Norm Perez and asked him for details on Marina such as character, academic performance and playing ability.

Marina was then advised by Coach Perez to contact George Mason and to establish a rapport with them. During the course of the year, Marina sent E-Mails and spoke to Coach Verbanic on the phone every few weeks to provide updates on her travel and high school seasons.

There was no sophomoric slump in Year 2 at Mary Star this past season, as Vitalich went 20-9 with 1.64 ERA and broke her own school record with an astonishing 249 strikeouts opposed to just 32 walks in 174 1/3 innings pitched in powering the Stars to their third straight Camino Real League title, and a playoff run that pushed Mary Star into the CIF-Southern Section Division 6 championship game against Bell-Jeff of Burbank.

The wheels began to turn at George Mason months thereafter, as Vitalich visited the campus on October 24, attending the Mid-Atlantic Showcase in Fairfax, Virginia. Marina pitched in 6 different 50-minute scrimmage games, not allowing a run the entire weekend. Marina toured the campus and athletic facilities and ended the weekend with a private meeting with all three of the Mason coaches.

Then the magical weekend came.

On November 9-10, Marina was playing in Hemet, California when her Firecrackers coach Tony Rico requested Marina come pitch for his elite team against Cal Lite 18 Gold. She was honored at being asked to play for one of the top teams in the United States. As usual, Vitalich pitched a shutout and after the game was told by Rico to call Verbanic on Monday for some big news.

So on Veteran's Day, Vitalich called Verbanic who offered her a scholarship.

He then told Marina to think about it and to talk it over with her parents before committing. Then they all had a discussion and called both Rico and Perez to tell them the good news, thanking them for their mentoring and assistance with the recruiting process. Marina called Coach Verbanic that afternoon and told him she was ready to be a Patriot.

"First, I wanted to get out of California," Vitalich said on the process of her verbal commit. "But what sold me on Mason was the fact the university is a direct pipeline to Washington DC. Whether its the White House, Pentagon, CIA or corporations, Mason will set me up for life. Coach Verbanic has Congressmen and women speak to his teams all the time. I can't wait to be apart of the program!"

Before she makes that move, Vitalich, who boasts a phenomenal 4.3 GPA, will try to once again lead Mary Star to a fourth straight Camino Real League title and challenge for a CIF-SS title. Her metaphoric rise as a powerful pitcher and all-around play has made Vitalich the most iconic softball figure in San Pedro since former Pirate great Ashley Esparza, who went on to a solid collegiate career at Penn State.

"Surprisingly, I don't think she really gets enough credit for what she has accomplished," Aguilar says of Vitalich's first two years at Mary Star. "Given our small school numbers, us playing in the CIF-Southern Section against upper division teams the last two years, she has still put up big numbers. We had a solid team before she arrived but she has taken us to the next level and deserves to be one of the greats in San Pedro prep softball."

Regardless of how her final two years ends up at Mary Star, Vitalich has already established quite a legacy and is looking forward to make a promising contribution at George Mason.

"My goal at Mason is to win the Atlantic 10 Conference," Vitalich says on her designs of a promising career at a Division I school. "I want to lead Mason the NCAA tournament."

What a nice article Mr. Street. We really appreciate your kindness and support of our daughter.