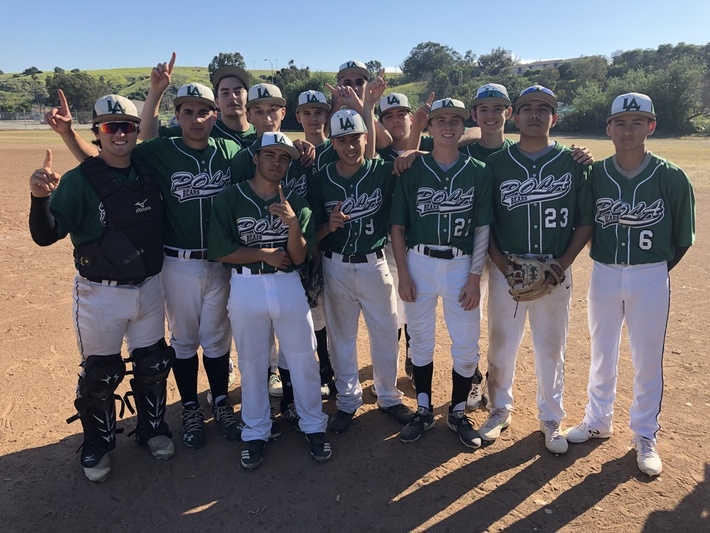 For the first time since 2015, Port Of Los Angeles High baseball was able to clinch a league title when it officially dethroned last year's Coliseum League champion and fierce rival Harbor Teacher Prep of Wilmington, 12-1 in five innings at the Henderson Baseball Field (San Pedro Sports Complex) for the inaugural Imperial League championship. This win is just another addition to how historic the season has been, and could still be for the Polar Bears (18-2 overall, 5-0 league).

Due to Washington Prep and Jordan of Los Angeles each dropping their programs mid-season, that virtually guarantees an outright league crown for POLA, who has only lost to Mary Star and Maywood CES, and already this season has produced a school record for victories.

Not even the 2014 Polar Bears who won a CIF-Los Angeles City Section Division 3 championship can say they've won the most games in a season in school history now.

POLA struck first in the top of the first inning on a towering RBI-double to deep center field by junior catcher Anthony D'Anna, but in the bottom half, the Monarchs (11-9, 3-2) answered back quickly with a well executed hit-and-run for an RBI-single to tie the score at 1-1. However, one big defense play gave the Polar Bears all the momentum for the remainder of this third meeting between the Harbor Area neighbors.

Still with a runner on second base for Harbor Teacher Prep, a line drive was blasted right at POLA junior shortstop Jeremy Juarez, who caught it and quickly fired to junior second baseman Matthew D'Anna for a crucial double play. Junior pitcher Tim Stevenson induced a ground out to end the first inning.

From that point on, the offense of the Polar Bears would explode, and at the same time, the defense of the Monarchs' begun to implode.

Senior Will Magrini would drill an RBI-single to start a three-run barrage in the top of the second inning to put POLA ahead to stay, but then two more would score when Juarez hit a high chopper that bounced over the third baseman's glove for an RBI, then Magrini scored on the same play as the Monarchs' tried to get him at third base. The throw was low and away from the third baseman, and suddenly POLA led 4-1.

Matthew D'Anna hit an RBI-single to right field in the third inning, which was followed by two ground-outs to bring home two more for a 7-1 POLA edge, then in the fourth, another error followed by an RBI-single from Stevenson made it 9-1. Finally in the fifth inning, an RBI-triple from sophomore center fielder Rudy Rios led to him also scoring on yet another Monarch miscue, then junior pinch hitter Nolan Flores singled to center for another RBI, and the final run of the game.

The double play in the first inning allowed Stevenson to settle down on the mound, as he ended up hurling a five-inning complete game allowing just one hit, striking out four and walking two. POLA only committed one error defensively opposed to eight Monarch defensive lapses. Stevenson helped his own cause as well by going 3-for-3 at the plate with an RBI. Rios went 2-for-3 with a double, triple, an RBI and two runs scored for the Polar Bears.

This was the third time this year POLA has defeated Harbor Teacher Prep, also winning 7-1 in the POLA Tournament on February 27, and when the Polar Bears were the home team at Henderson Baseball Field on March 18 in an Imperial League opener, POLA edged the Monarchs, 6-3.

POLA gets a week off and two forfeit wins over Washington Prep and Jordan... so their next game is on May 8 at Santee, and the final league game is Friday, May 10 at King-Drew Medical.