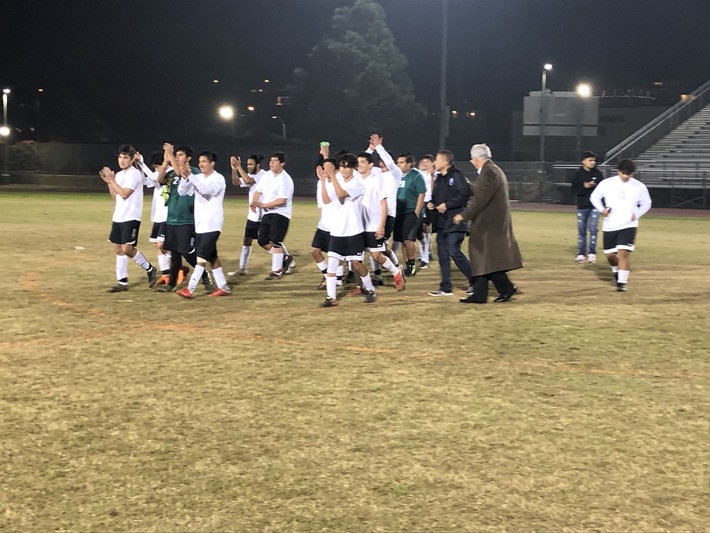 In the seventh all-time crosstown showdown with San Pedro, a year and a half removed from winning the 2018 CIF-Los Angeles City Section Division 4 championship, the Polar Bears finally rose to the challenge and took the fight right back to the host Pirates, battling to a 1-1 draw at Mike Walsh Pirate Stadium.

This latest battle marked the first time ever where San Pedro (3-4-2 overall) was unable to put away POLA (0-1-2), who narrowly lost 1-0 to the Pirates a year ago in what was the closest battle before Friday night's even result. San Pedro had owned the series with six straight victories, five of which were shutouts.

San Pedro would draw first blood as many expected in the eleventh minute when Ikemdinachi Ekwonye put in a shot with his left foot from close range, just skimming through the net off the right side of the goal for the 1-0 lead, but the Polar Bears didn't panic and kept on fighting. POLA would tie it in the 38th minute when Fernando Chavez beat the San Pedro defense on a breakaway created by a deep pass, and put in the equalizer on the left side of the goal.

Both goalies did a phenomenal job in keeping their respective teams in the game, but San Pedro was the more aggressive team in the second half, creating shot after shot, but was denied each time on near misses or saves.

San Pedro was coming off a 5-1 victory over Hawthorne on Thursday and carried that confidence into the game with POLA who was battle-tested with a 1-1 tie with Crenshaw in an Imperial League game also played on Thursday. Both teams will resume play with San Pedro taking on South Torrance on December 19, and the Polar Bears don't have another game scheduled until December 30 in another crosstown showdown with Mary Star at Daniels Field.

Times have definitely changed past seven years for the Mary Star High girls basketball team.In the 2012-2013 season, the Stars only won once in their 16 games, but ever since coach Victor Tuberosi took over the program the next year, opposing schools are way past looking on their schedules pointing to where Mary Star is on it and circle that day as a guaranteed…See More
8 hours ago
0 Comments 1 Promotion