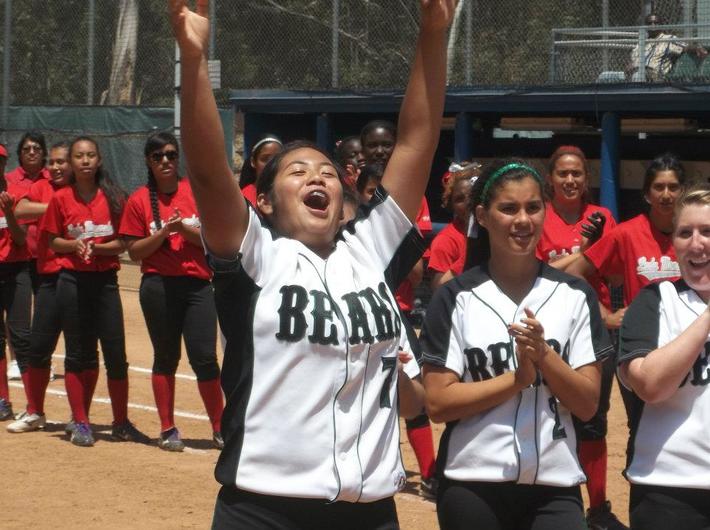 The first year of softball playoff eligibility in the CIF-Los Angeles City Section for POLA was 2011, then from that point on, the Polar Bears would capture three straight CIF-LACS Small Schools Division (Division 3) championships at three different venues, going undefeated in Crosstown League play all three years, and even posting some notable victories outside of league and postseason play.

During this incredible run under the husband & wife tandem of Moses and Melissa Bugarin-Espinoza coaching the team, POLA has produced some amazing talent to come out of the program like Miranda, Kelsea Short, Brianna Grayson, Savana Ramirez, Rosemary Garcia, Allison Bayer and Sarah Maldonado just to name a few.

Here is a short look at all three championship seasons. 2011 Season (18-7 Record) - It was the most gutsiest of the three championship teams, and the historic first CIF-LACS crown in the annals of POLAHS sports.

All seven losses came combined in the Loara and El Segundo Tournaments, with two of their defeats coming to both in-city neighbors: a 3-1 loss to Mary Star Of The Sea in the season opener at Bloch Field in San Pedro, and 9-0 to San Pedro in the El Segundo Tournament opener. Those setbacks alone benefited the Polar Bears to a perfect 12-0 Crosstown League record, also posting notable wins over Rolling Hills Prep and Royal of Simi Valley.

POLA's first playoff run netted them the top seed of Division 3 and a first-round bye of a very short 12-team bracket, then they steamrolled Sherman Oaks CES and Community Harvest of Los Angeles in the quarterfinals and semifinals respectively.

The championship game was at Birmingham Community Charter High School in Lake Balboa, where on May 25, 2011, POLA made hometown and school history with a 2-0 victory. Short was the catalyst in the win, driving in Grayson with a one-out single in the bottom of the first, then scoring off a throwing error in the fourth, finishing 2-for-3 on the day. 2012 Season (21-7 Record) - This was another memorable team considering it got to do what San Pedro was able to do twelve times before, win a CIF-LACS championship on the campus of UCLA.

Along the way, the Polar Bears defeated the Pirates, 6-5 in a highly anticipated rematch to open the El Segundo Tournament for its biggest regular season victory to date, thanks to a walk-off RBI-single from Short.

That's also the same score POLA defeated Marymount in their season opener at the Redondo Tournament in which Miranda made her high school debut, striking out 16 in a nine-inning victory. Another notable win came in the Torrance National Tournament when Miranda and the Polar Bears shut out New Mexico power Piedra Vista, 3-0 at Wilson Park

Crosstown League play was a breeze once again, then playoff wins over Sherman Oaks CES and Vaughn of San Fernando set the Polar Bears up for a Division 3 title showdown at Easton Stadium in Westwood against league rival Harbor Teacher Prep, who fought hard, but ended up on the wrong side of a 6-0 shutout where Miranda hurled a one-hitter with 12 strikeouts.

Grayson nearly hit for the cycle going 3-for-4, as her RBI-triple in the bottom of the fifth opened the floodgates and broke a scoreless tie. Miranda, the CIF-LACS Small Schools Pitcher Of The Year, also shined at the plate, driving in two runs with a single in the fifth, and a sacrifice fly in the sixth, where Short and Bayer also had RBI-hits.

First, they stacked themselves up with a grueling tournament schedule where they competed in the Redondo, TNT (Torrance National Tournament), Las Vegas Spring Jamboree and El Segundo Tournaments, where POLA went a respectable 12-8, beating three schools with 25-plus wins during the year: Empire of Arizona, Verrado of Arizona and Banning of Wilmington.

Secondly, a team already with talented players, got even more dangerous with the additions of two transfers: Ramirez from West Torrance, and Garcia, who's sister Victoria was a member of San Pedro's 2009 CIF-LACS Division 1 championship team. Both Ramirez and Garcia coming aboard proved to be problematic for all Polar Bear opponents.

Finally, this was the most dominant out of all three POLA softball teams in both Crosstown League play, and the CIF-LACS Division 3 playoffs to boot. The Polar Bears run ruled New Designs of Los Angeles, Legacy of South Gate and Valley Academy Arts & Sciences of Granada Hills in the first three rounds, then nearly did the same to then-undefeated Northridge Academy, 16-3 in the championship game itself at Cal State Dominguez Hills in Carson to cement their legacy as a program on the rise.

A whopping twelve of the 16 players on the roster were named to the All-City Small Schools Team, with Miranda earning her second straight Pitcher Of the Year honor. Miranda allowed no runs on three hits, striking out 10 batters in six innings, as in the top of the sixth the Pumas scored three runs off Vanessa Munoz in Miranda's lone inning of rest. Bayer, who clubbed a school-record 11 home runs on the season and went 3-for-5 with a pair of doubles and RBIs, was named Player Of The Year.

Ramirez had the best day of all, also going 3-for-5 with a double but she drove in 5 RBIs in the final against Northridge Academy.

Once this short dynasty concluded, POLA softball moved to Division 1 immediately after... and made the semifinals four years in a row from 2014 through 2017, losing to the eventual champion the first three years, and now competes in Division 2.