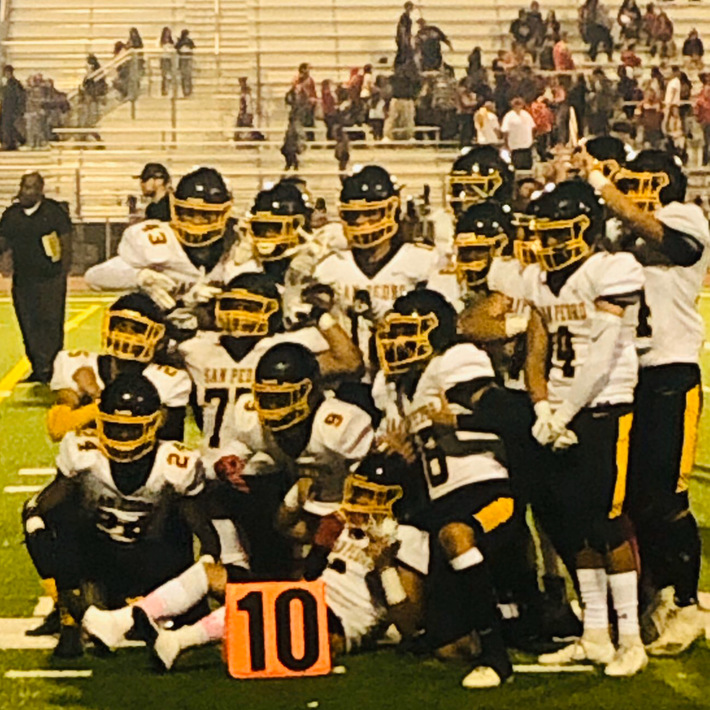 WILMINGTON - Call it a comeback? Nope, more like a come up.

There was only one way for the Pirates to deal with it going forward... by taking over the Battle Of The Harbor and taking out their first loss of 2019 on Banning of Wilmington.

A solid third quarter surge would do the trick in accomplishing their mission as the visiting Pirates would prevail over the Pilots, 41-16 on Friday in the 83rd all-time meeting between the Harbor Area neighbors... which is now dead even: 40 wins apiece for both schools along with three draws. It's San Pedro's second win over Banning in the past four years now, ending the Pilots' modest two-game winning streak in the rivalry.

The stingy defense that has been a factor all year long for San Pedro (6-1 overall, 1-1 league) returned to form, as did the electrifying running of UC Davis commit senior running back Joshua Ward, as that deadly combination proved to be too much for the Pilots (3-4, 1-1) to overcome.

Banning would draw first blood with a field goal on the game's opening drive, but Ward would push the Pirates ahead with his first of eventual four touchdowns on the night, a 36-yard run up the middle for a 7-3 lead with over five minutes to play in the first quarter. San Pedro's defense would shut out the Pilots in the second quarter, and got the first big play of the night on an interception by senior WR/DB Jahmar Brown.

Ward would score his second touchdown run of three yards late to increase San Pedro's advantage to 13-3, which remained that way at the end of the first half.

Just a minute into the third quarter, Ward exploded on his third carry of the opening second half offensive possession for a 60-yard touchdown run, and suddenly it was 20-3 in San Pedro's favor. Banning senior quarterback Jake Otto, the 2019 Marine League Offensive Player Of The Year, rushed for a 10-yard touchdown on the next possession to cut the Pirates' lead to 20-10, then Otto's counterpart, San Pedro junior quarterback Dylan Kordich would answer... with a 16-yard touchdown pass to Ward for a 27-10 advantage.

On the next offensive series for Banning, junior defensive back Richie Sanchez perfectly read a route, then picked off Otto's slant pass and returned it 35 yards for a backbreaking touchdown with 1:52 remaining in the third quarter. Suddenly it was a 34-10 San Pedro edge.

Otto struck again for a 20-yard touchdown early in the fourth quarter for the Pilots' final touchdown, but was stuffed on the two-point conversion attempt. The final touchdown for the Pirates was a 16-yard wild cat run from sophomore WR/DB Robert Ellett to round out the scoring.

Even after the loss to Narbonne, San Pedro jumped to No.2 in the CIF-Los Angeles City Section Open Division watch list ranking by Cal Preps, so this convincing win over Banning (No.4) pretty much solidified that lofty position.

The Pirates travel to CIF-Southern Section power Sierra Canyon of Chatsworth next Friday for one final nonleague test before finishing Marine League play with Homecoming against Gardena the following Friday, and a road game at Carson in the season finale on November 1.