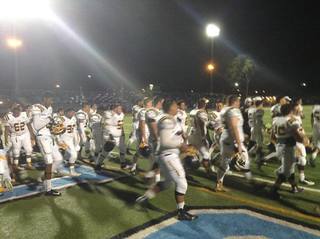 CARSON – Suddenly, the San Pedro High football team is realizing their true potential coming to life almost at the blink of an eye.

A stunning 28-point second quarter would be all the Pirates need as they defeated host Carson, 35-7 in a surprising Marine League rout Friday, something completely unexpected considering all the tough battles San Pedro has endured in recent years against the Colts, including two classic struggles a season ago that was decided by a combined five points.

With this victory, the Pirates are now alone in second place in league play.

The defense came to play in this one for San Pedro (6-3 overall, 3-1 league), forcing three Carson (3-6, 2-2) turnovers, and stopping the Colts on downs four times, one of which was a fumble recovery by senior linebacker Vincent Wood midway through the second quarter.

It didn’t look like the game would go according to plan for the Pirates on the first play from scrimmage.

Carson senior QB/WR Dayshawn Littleton, playing for the injured freshman quarterback Jaja Bellinger, would bust an 80-yard touchdown out of a shotgun draw, but a holding penalty wiped out the score. From there, San Pedro’s defense would eventually settle down, forcing a punt.

San Pedro sophomore running back Kai Kaneshiro would break free for a 51-yard run to set up his own six-yard touchdown run on the first play of the second quarter to start the Pirates’ remarkable run.

Another bad turn seemed to come for the Pirates when senior WR/DB Antonio ‘A.J.’ Frazier Jr. muffed a punt after the defense forced a three-and-out, and Carson recovered on the San Pedro 27-yard line. It didn’t take long for Frazier Jr. to forget about it, and the Colts would pay a severe price for it.

Littleton forced a slant pass over the middle, Frazier Jr. would read it and reach out to pick it off and made one cutback to return it 84 yards for a killer touchdown, putting San Pedro up 14-0 with 8:14 remaining in the second quarter. Wood’s fumble recovery would lead to another big run by Kaneshiro, a 52-yard jaunt to set up senior quarterback Jacob Miller’s 1-yard sneak for a touchdown with 3:33 left.

Another Carson turnover on downs would give the Pirates great field position, and Miller would capitalize with a 37-yard touchdown pass to junior wide receiver Raymond Geha with 54 seconds to play before halftime, capping off San Pedro’s 28-point second quarter onslaught.

Littleton would get Carson on the board with a 64-yard touchdown run off the Colts’ only fourth-down conversion in five tries with 4:46 remaining in the third quarter, but the Pirates’ defense remained stout in getting to both Littleton and Kyrin Cannon on four occasions, with senior TE/DL Mike Spinosa, sophomore linebacker Sean Davenport, senior RB/DL Donte Huddleston all recording sacks. Spinosa had two of them.

Carson’s defense would force a turnover on downs for a second time before going into the fourth quarter, but an interception by San Pedro junior WR/DB Mikey Hernandez Jr. in the end zone thwarted the Colts’ last best chance to score midway through the fourth quarter on another fourth down stop.

Kaneshiro, who ran for a game-high 188 yards and a touchdown on 18 carries, would run for 13 and 30 yards on San Pedro’s final scoring drive, which ended with senior running back Brian ‘Beejay’ Halsey’s five-yard touchdown run, which followed his own 15-yard run, with 4:07 remaining in the game. Halsey ran for 43 yards for San Pedro.

In all, the Pirates have now won their last three games in the Marine League by a combined 145-16 after suffering an opening 10-9 loss to Banning of Wilmington on October 9, but by no means are they finished yet. A much more greater challenge awaits San Pedro…

Narbonne of Harbor City, who decimated Banning, 60-7, is who the Pirates will face next Friday at San Pedro High. The Gauchos (7-2, 4-0), defending CIF-Los Angeles City Section Division I champions and highly ranked in California, have scored no less than 58 points in their four Marine League routs and have won their last six in a row with little to no problem.

Don’t expect the Pirates to not be ready for this one… they will no doubt take this challenge head on.