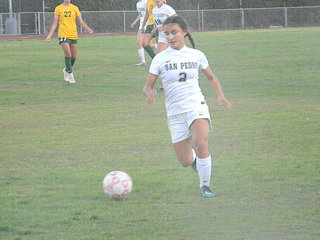 Until something drastically happens... San Pedro High girls soccer continues to rule in the Marine League.

On Friday, the Pirates turned back yet another challenge from its fiercest competitor, Narbonne of Harbor City, this time in a 3-0 victory for sole possession of first place, which is usually the norm when these two rivals get it on.

Coming into their first league war of 2018, San Pedro (10-2 overall, 5-0 league) and Narbonne (6-7, 4-1) were cruising along in league play, not allowing a single goal, but when junior midfielder Samantha Martinez headed in a perfectly set-up corner kick from freshman defender Kylie Danelo in the 15th minute, the Pirates erased any doubts if there were any, that they still were the team to beat.

San Pedro's defense was unrelenting, not allowing the Gauchos any easy looks at the net, and when they did get an opportunity to score, senior goalie Carlene Luna made five saves at the net. The Pirates controlled field possession throughout the day and if it weren't for three offsides calls that wiped out goals scored by both sisters Samantha and freshman Karina Martinez, the Pirates would have carried a 4-0 lead into halftime.

Nevertheless, San Pedro was glad to have the one-goal edge as their main objective was to shutout the Gauchos.

In the second half, Luna rarely touched the ball. In fact, Narbonne's best chance to score came in the 70th minute on a direct free kick, in which Luna made a bucket catch.

After backtracking with the ball in the box, San Pedro sophomore midfielder Renee Ketner was fouled, setting up a penalty kick for Karina Martinez that she nailed easily for a 2-0 Pirate lead in the 61st minute.

After Narbonne's failed attempt at breaking up the shutout bid for Luna, the Pirates kept pressing the issue when a Narbonne defender kicked it off the back of another Gaucho player. Ketner seized the ball, and the moment by blasting a pretty shot off her left foot into the right corner of the net for the final score of the game in the 76th minute. Once the final whistle blew, San Pedro embraced each other before the post-game handshake, fully realizing their job still is not done in pursuit of an unprecedented 13th straight league crown.

San Pedro and Narbonne will meet in the season finale on February 8 at Narbonne where even a tie gives the Pirates the outright crown.