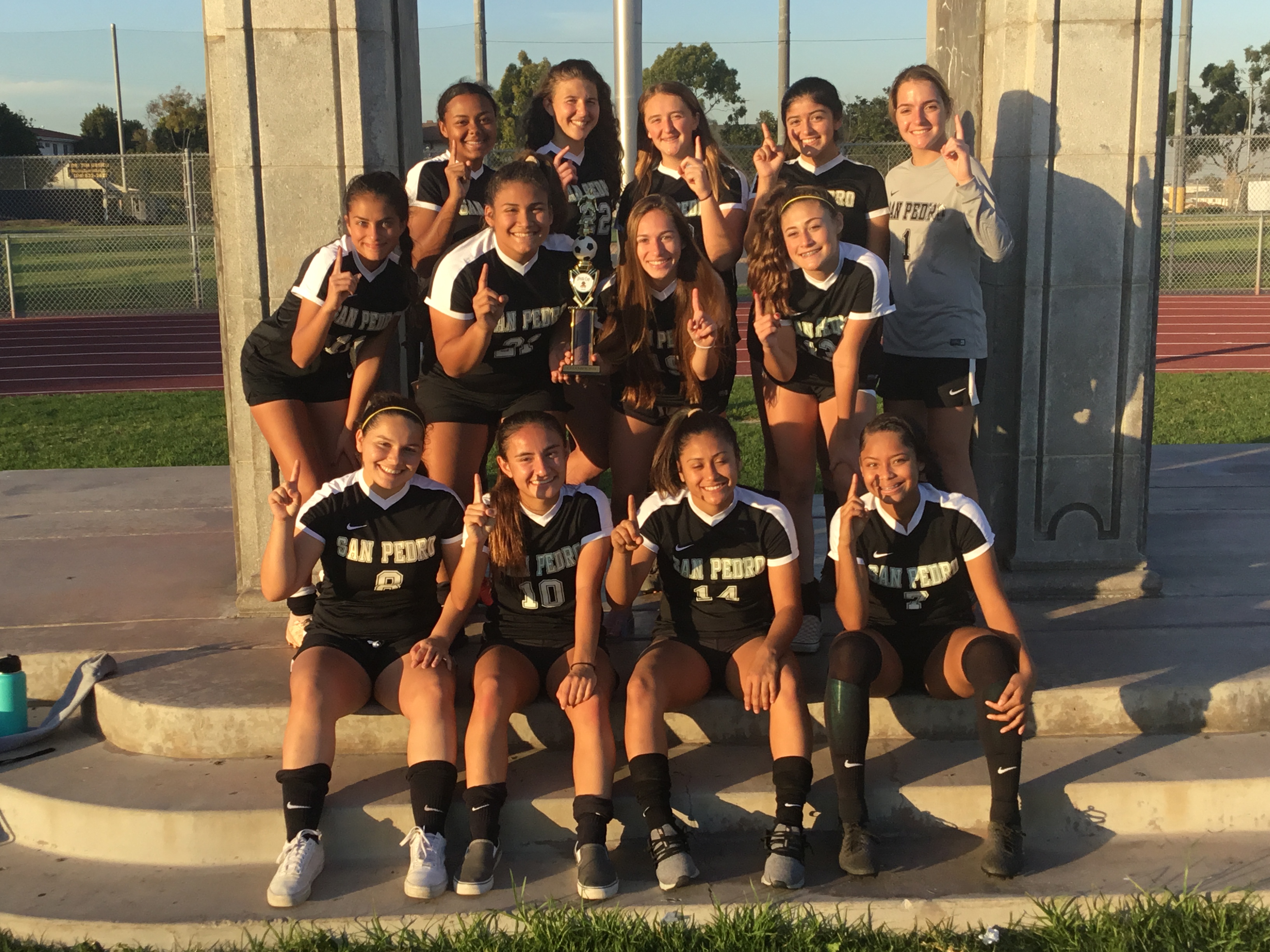 In the nine-year history of the San Pedro Lady Pirate Cup girls soccer tournament, San Pedro High girls soccer didn't fare so well in the first five years, but the previous three years they won their own Cup twice, but fell short 1-0 to Bishop Montgomery of Torrance in the 2017 Lady Pirate Cup final, preventing a three-peat.

Now the Pirates can add a third Lady Pirate Cup first place trophy to their mantle to close out 2018.

It was a physical battle with visiting South East of South Gate that determined it all, but San Pedro emerged with a 2-1 victory on Friday at Mike Walsh Pirate Stadium, in a matchup between two schools that had their respective 2017-2018 seasons end in the CIF-Los Angeles City Section Division 1 semifinals. San Pedro (6-2-1 overall) has now won five straight games.

Earlier in the day, San Pedro defeated Valley Academy Arts & Sciences, 4-0 on the strength of a hat trick performance from senior midfielder Samantha Martinez. Against South East, Martinez, an All-City Division 1 returner, did her damage on throw-ins to assist on both Pirate goals.

During the seventh minute of the contest, Samantha Martinez ran up to throw in the ball which her sister, sophomore midfielder Karina Martinez would read perfectly and head it in for a 1-0 San Pedro lead. South East would answer three minutes later when senior midfielder Ashlynn Gonzalez would blast in a free kick over the outstretched arms of sophomore goalie Kaley Sutrin to even the score. That was the 92nd career goal for Gonzalez.

However, Samantha Martinez would strike again with another perfect throw-in during the 19th minute, this time it would be headed in by sophomore forward Abigail Cazares, putting the Pirates ahead to stay.

Somehow, San Pedro's other goalie, junior Katelyn Viducic, who plays her first full year with the Pirates after helping guide nearby Port Of Los Angeles to a CIF-LACS Division 2 title in 2017 her freshman year, would keep it that way.

Even though the Pirates controlled the majority of the field possession and had several near misses from the likes of both Martinez sisters, All-City returning junior midfielder Renee Ketner, sophomore Kylie Danelo and sophomore Brianna Johnson (Westchester transfer), the Jaguars had the two best breakaway opportunities, which Viducic made impeccable diving saves on both attempts to even things up.

South East (4-2) recovered from their loss to San Pedro by winning their final game of the Lady Pirate Cup against Wiseburn Da Vinci of El Segundo via a penalty kick shootout after regulation ended in a 1-1 draw.

San Pedro, who also defeated Marquez of Huntington Park (last year's CIF-LACS Division 3 champion) and Wiseburn Da Vinci in two pool play games earlier in the week, will next have a Marine League opener at Banning of Wilmington on Monday, January 7, 2019.