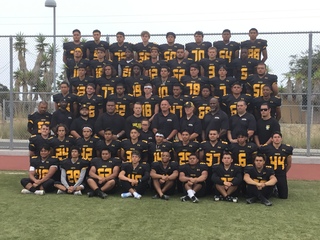 For only the second time since 1990, the San Pedro High School football team endured a losing season in 2017.

Splitting the ten-game regular season in half with an even 5-5 record, but finishing fourth in the Marine League at 2-3 for the first time since 2007, the Pirates would be promptly eliminated in the first round (quarterfinals) of the inaugural CIF-Los Angeles City Section Open Division playoffs by the eventual four-time champion, and eventual CIF State Division I-A champion, Narbonne of Harbor City.

San Pedro started off the second year of head coach Corey Miller winning their first three games and scoring 42 points each in the first four games, but losses in four of their next five games dropped the Pirates down several notches before finally ending the year with a 35-0 victory at Washington Prep of Los Angeles.

That would be the final time San Pedro would face the Generals, as the 2018 season begins with the Marine League one school short due to the new realignment in the CIF-LACS. Rancho Dominguez Prep of Carson/Long Beach replaces Washington Prep in the Marine League for every other sport but football.

The 2018 season will also see San Pedro endure what could be their toughest nonleague schedule to date now that there’s only four league games.

San Pedro will enter its 19th year at the on-campus 6,000-seat Pirate Stadium as they welcome the likes of North Torrance in the season opener on August 17, Downey (September 7), Carson (September 28), Harbor Area neighbor Banning of Wilmington (October 12) and the Homecoming intersectional showdown with highly-regarded Sierra Canyon of Chatsworth on October 19.

For the road games, San Pedro has two San Fernando Valley trips to Grant of Van Nuys on August 24 and Cleveland of Reseda on September 21, and shorter trips to Long Beach Cabrillo (August 31), then in the Marine League against Narbonne (October 5) and the finale at Gardena (October 26).

San Pedro is young, but dangerous for 2018, as they lost a lot of senior leadership along with several other key players transferring to other schools.

Normally when you think of Pirate football, you immediately think ‘Pound & Ground’ with an established running attack, but the top two returning players just might make you think otherwise.

Senior quarterback Justin Bernal, the Pirates’ lone returning All-City selection from a season ago, returns after a stellar junior campaign in which he threw for 1,271 yards on completing 95 of his 173 attempts (54.9% completion rate), tossing 16 touchdowns opposed to just six interceptions.

In just six games played after transferring from Hawkins of Los Angeles, senior WR/CB Camren Thomas made an immediate impact, catching 19 passes for 220 yards (11.6 yards per catch) and a pair of touchdowns. With a full season ready, expect the All-Marine League second team offensive selection to be a focal point when the Pirates do indeed take to the air.

Other than Thomas, Bernal also has juniors Andres Srsen and Jerad Braff, along with talented sophomore Joshua Johnson as potential threats in the passing game.

With Sean Davenport, his 1,046 rushing yards and 14 touchdowns now gone, and junior Giovanni Rizzo, the second best rusher from a season ago, moving onward to nearby Mary Star, expect junior Joshua Ward to be the main guy in the backfield. Ward rushed for 303 yards and four touchdowns on 39 carries for San Pedro last season.

The defense will be the youngest part of the field as All-Marine League returning defensive tackle Pedro Cazares, who had 39 tackles and led San Pedro in sacks with seven, is the only projected senior to start on the first string of eleven on defense.

Ward, who is also an outside linebacker, is San Pedro’s top returning tackler with 42, while also posting a sack, an interception, and two forced fumbles. Senior defensive tackle Jacob Duran, also a standout on the boys wrestling team, adds a new dynamic to the front seven which should also feature junior defensive end Matthew McCabe, junior linebackers Samuel Luna and Matthew Reveles, along with senior defensive end Gerson Kemp.

Thomas anchors the secondary which will have three new starters who will likely be Johnson, Braff and Srsen, who also will handle the kicking duties for the Pirates, especially on PATs and field goal attempts. McCabe, who also plays tight end on offense, will be the punter.

Going into their 111th season of prep football (including rugby), San Pedro has posted a record of 561-393-38 overall under 22 different coaches.