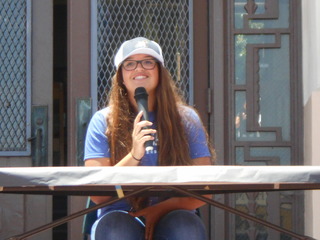 For the third time in four months, San Pedro High School hosted an official signing day ceremony, and this one was perhaps a long time coming for its most decorated and storied sports program.

San Pedro High softball senior infielder Johnie Cortez became the fourth at the school in recent months to sign with a college to play collegiate softball and further her education, and in Cortez's case, it's likely the most unique opportunity of them all, as she will play for Marymount California University, a private college on the Hill in Rancho Palos Verdes that will be starting a new softball program in 2016.

Not only that, Cortez, who helped lead the Pirates to a 21-11 record this season, will also play under San Pedro's greatest softball product in MCU coach Ashley Esparza, a former four-time CIF-Los Angeles City Section champion with the Pirates from 2001-2004.

"I really like coach Ashley so that was a big factor," said Cortez, who leads the Pirates with three home runs so far this season. "The location and the academics was also a plus. MCU is great for people who are looking for great academia and a great opportunity to meet new people."

The entire Cortez family, Esparza, former San Pedro coach Tony Dobra, current coach Robert Whitney and a host of her best friends and teammates were all there in support of Johnie in one of her finest moments.

Last year, Cortez hit a walk-off double to defeat Peninsula and made the All-Marine League first team for the first time. Already in 2015, Cortez helped lead San Pedro to a repeat Whittier Tournament championship and hit a booming grand slam home run in an 11-10 loss at Carson back on March 23. Cortez is a sharp infielder, being involved in a school record 11 double plays regardless if she started it or not.

There is only one thing Cortez hopes to accomplish more than anything else before she graduates June 4...

"I hope to accomplish playing my heart out and leaving everything I have on the field," Cortez says.

San Pedro earned the No.8 seed of the CIF-Los Angeles City Section Division I playoffs and will host No.9 Kennedy of Granada Hills next Tuesday at 3 pm.