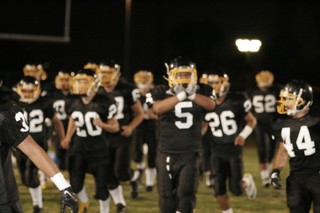 You get a sudden sense of deja vu... but that's exactly what San Pedro High football will be pondering as they begin the 2013 CIF-Los Angeles City Section Division I playoffs.

After finishing the season at 7-3 overall and third place in the Marine League, the Pirates were awarded the sixth seed of the tournament... just like last season. The CIF-LACS Division I playoffs officially begins for the 16 teams who were selected this coming Friday at 7pm.

San Pedro also faces the No.11 seed, Fairfax of Los Angeles... just like last season, where the Pirates eliminated the Lions with a 35-10 victory. San Pedro also owns a 21-14 victory over Fairfax this season, back on October 4 at Fairfax High, and a 29-0 victory over Fairfax in the 2012 regular season. That's right, three victories in a row, but the last one earlier this season was the closest of them all.

Does this mean the Pirates, who closed out the 2013 season with seemingly carefree Marine League wins over Banning of Wilmington, Washington Prep of Los Angeles and Gardena, are ripe for a possible upset?

Not if the hard-hitting defense has anything to say about it.

Since a 27-21 loss to Carson to begin the Marine League season, San Pedro held eventual top seed and two-time defending City Section Division I champion Narbonne of Harbor City to their lowest point total of the season in a 12-11 loss, forcing two safteties, stopping the Gauchos on downs four times, turning them over once. San Pedro surrendered an early touchdown to Banning, but since then, the defense has not allowed a touchdown for 11 consecutive quarters.

They're going to have to remain solid, because Fairfax senior quarterback Myles Bowen is salivating at the prospect of having one more chance at San Pedro.

Bowen has thrown for 1,794 yards on 114-of-195 passing, 17 touchdowns and three interceptions for Fairfax (5-5), while also rushing 92 times for 419 yards and five more touchdowns in pacing the Lions to a runner-up finish in the Western League.

Another threat San Pedro's defense has to keep close eyes on is junior running back Jenabu Edwards, who has 983 rushing yards and 9 touchdowns on 132 carries. Edwards rushed for 227 yards and a pair of touchdowns on 20 carries to spark Fairfax to a 34-26 victory over University of Los Angeles in their season finale Friday.

When these two met at Fairfax earlier in the year, both teams turned it over three times in a crazy defensive struggle that the Pirates shined in, stopping the Lions on downs twice in the fourth quarter before Fairfax scored late to make the score somewhat respectable. San Pedro's traditional running game was effective just enough to hold off Fairfax on that night.

San Pedro will need a solid outing from Palacios, junior running back Chris Alvidrez and the offensive line, not to mention sophomore quarterback Jacob Miller, who struggled mightily in the victory over Fairfax, throwing three interceptions, in order to advance into the quarterfinal round.

Hopefully in the Pirates' case... just like last season.