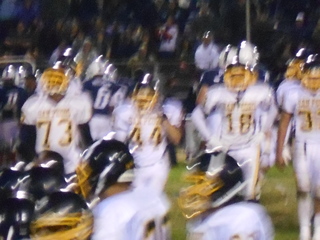 VENICE - It was the fifth time in seven years San Pedro High football has had to deal with Venice in the CIF-Los Angeles City Section Division I quarterfinals, both teams splitting a pair of victories.

Now it seems like the Gondoliers has the Pirates' number.

A strong passing attack and overall sound effort by Indiana-bound quarterback Alexander Diamont coupled with untimely mistakes at both ends would eventually be the downfall of San Pedro, as they fell 28-14 to the third-seeded Gondoliers in a game that saw the Pirates squander two possible scoring opportunities in the second half that might have changed the outcome.

Diamont was almost perfect, completing 13-of-15 passes for 180 yards and three touchdowns, while also rushing for a seven-yard touchdown of his own to power Western League champion Venice (10-2 overall) into next Friday's semifinal rematch with second-seeded Crenshaw, a 58-0 winner over No.7 Dorsey.

Venice didn't take long on the game's opening possession, as Diamont's 13-yard touchdown pass to senior wide receiver Keino Mitchell gave the Gondoliers a 7-0 lead with 9:25 left in the first quarter. Thanks to the infamous 'Pound-N-Ground' attack of sixth-seeded San Pedro, Venice never touched the ball again for the remainder of the quarter.

The Pirates (8-4) would drive from their own 10-yard line, and ran off a ridiculous 20-play, 90-yard drive that carried over into the second quarter, ending with sophomore WR/DB Antonio Frazier's 12-yard touchdown run off an inside shotgun draw that tied the score at 7-7 with 10:44 to play. During that drive alone, San Pedro converted on fourth down twice, including a clutch 17-yard pass by sophomore quarterback Jacob Miller to Frazier on the first play of the second quarter.

A pair of three-and-outs followed that drive, but a short punt from Miller gave Venice great field position on the San Pedro 42-yard line, and the Gondoliers capitalized with Diamont's seven-yard touchdown scramble.

A turning point for Venice came when San Pedro was once again driving, to Venice's 26-yard line. On third-and-9, Miller was picked off by senior linebacker Jerry Stokx, who returned it to midfield. Diamont would complete passes of 26 and 15 yards before firing a goal-line fade for a four-yard touchdown in the back of the end zone to senior wide receiver Dajuan Parham for a 21-7 Gondoliers advantage with a minute left before halftime.

San Pedro would once again drive long to begin the third quarter with a 14-play, 80-yard drive was capped by a 2-yard quarterback sneak by Miller for a touchdown that cut Venice's lead down to 21-14 with 5:54 remaining, and the Pirates appeared to have Venice stopped near midfield, setting up a fourth-and-one situation, but an offsides penalty gave the Gondoliers a first down.

Three plays later, Diamont threw a dart to Parham, who snagged the ball in midair before cruising to the end zone for a 43-yard touchdown, increasing Venice's lead to 28-14 with 3:25 left.

Once again, the Pirates threatened to make the game close again, driving all the way to the Venice nine-yard line, setting up first-and-goal, but a crucial false start penalty, a one-yard loss on a run by senior RB/LB Pete Palacios, followed by three straight incomplete passes from Miller put a halt to that drive with over 9 minutes left in the game.

The Gondoliers and Pirates traded punts on the next two possessions, but sophomore defensive back Vincent Wood would recover a fumble for San Pedro, giving the Pirates another chance. Yet, Miller would get intercepted a second time by Parham two plays after completing a 33-yard pass to Palacios, ending the Pirates' season for the second year in a row at Venice, and for the third time in four years.

Palacios ran for 131 yards on 27 carries, while junior running back Chris Alvidrez ran for 124 yards on 23 carries despite the fact neither scored a touchdown for San Pedro, while Miller was only able to complete 4-of-16 passes for 54 yards for the Pirates, who still played hard in typical San Pedro fashion despite the loss.