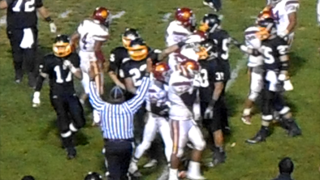 Many die-hard San Pedro High football fans thought their rematch with Fairfax of Los Angeles for this CIF-Los Angeles City Section Division I first round game was likely going to be ugly.

They were right... but not the way they envisioned how ugly it would be.

Yes, sixth-seeded San Pedro advanced with a 31-23 victory for their second victory over Fairfax this season alone, and fourth win over the No.11 Lions in two years, but the Pirates managed to win despite the fact that they turned the ball over six times - that's not a misprint - including five lost fumbles. Even with that mind-numbing statistic, San Pedro's defense managed to get two interceptions in the third quarter.

San Pedro travels to face third-seeded Venice, a 62-0 winner over No.14 Locke, next Friday in the quarterfinals.

The first quarter saw San Pedro (8-3 overall) lose two fumbles on their first two possessions of the game, the second was fumbled inside their own five-yard line, and Fairfax (5-6) immediately capitalized with a three-yard touchdown run by junior running back Jenabu Edwards for a 7-0 Lions lead with 7:17 remaining in the first quarter.

It only took a minute for the Pirates to tie the score as junior running back Chris Alvidrez's four-yard touchdown run with 6:13 left in the quarter made it 7-7.

Fairfax would grab its second lead of the the game at 14-7, literally, as sophomore wide receiver Kenny Allen went over the top of San Pedro senior defensive back Victor Viscarra to steal a possible interception for a 68-yard touchdown pass from senior quarterback Myles Bowen with 4:56 left in the second quarter, but the Pirates would strike with a pass of their own that was just as crucial.

With 54 seconds to play in the first half after a Fairfax three-and-out, sophomore quarterback Jacob Miller (2-for-6, 47 yards, INT) would toss a deep pass that Bowen tipped, but senior RB/LB Pete Palacios would come back to the ball and snag it for a 36-yard gain, setting up Miller's one-yard touchdown on the next play, tying the score yet again at 14-14 with 31 seconds left before halftime.

The third quarter was controlled by San Pedro, who would take the lead for good as senior linebacker Rudy Alvidrez intercepted Bowen on the first play of the second half, setting up a 39-yard field goal by senior kicker Fernando Hernandez for a 17-14 San Pedro edge with 10:16 remaining, then an interception by junior defensive back Chris Lauro set up a 23-yard touchdown run by senior running back Stephen Vaughn with 1:56 to play.

Yet, the 24-14 advantage the Pirates held at the end of the third quarter seemed like it could slip at any moment.

On the second play of the fourth quarter, Fairfax sophomore linebacker Ramses Hernandez literally stole the ball from Vaughn before he was tackled, and returned San Pedro's fourth fumble of the night 48 yards for a touchdown that cut the Pirates' lead to 24-20, as the point-after kick was blocked.

With 5:51 remaining in the game, San Pedro would take a 31-20 advantage on junior running back Anthony Bolden's nine-yard touchdown run, and it appeared that the Pirates were ready to pull away from Fairfax when the defense stopped the Lions on downs with 5:06 to play but eight seconds later...

Bolden gets hit, coughs the ball up, and the Lions would recover San Pedro's fifth fumble. Amazingly enough, it only led to a 29-yard field goal by Fairfax senior kicker Selvin Arenas with 2:30 remaining in the game. Bowen would complete a 36-yard pass to senior wide receiver Jason Lewis on a fourth-and-10 play to keep the drive alive, along with a 13-yard pass to senior wide receiver Rhaji Hicks that put Fairfax in field goal range.

The one thing that hurt Fairfax the majority of the night was penalties (six personal fouls), and unfortunately for the Lions, their last penalty occurred as they were attempting an onside kick, which was recovered by San Pedro anyway. Still, it was a five-yard penalty, and the Lions were forced to kick it deep.

San Pedro, who overcame three turnovers in a 21-14 nonleague win at Fairfax back on October 4, was able to get three first downs to run out the clock for the remainder of the contest, surviving a game that could have easily been their last of the season.

Palacios ran for a game and career-high 163 yards on 22 carries for the Pirates, whose defense limited Fairfax to 221 yards of total offense.