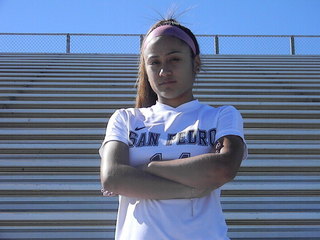 The 2017-2018 San Pedro Prep Girls Soccer season was once again successful, even if it didn't end with a CIF championship like it did just one year ago.

For the unprecedented thirteenth consecutive season, the San Pedro High girls soccer team won the Marine League championship but unlike most years, the Pirates did not only just capture the league crown outright, it was total domination as all ten games were won by shutout, and San Pedro (17-4 overall) made it all the way to the CIF-Los Angeles City Section Division 1 semifinals, where it fell 2-1 in overtime to eventual champion El Camino Real of Woodland Hills.

Scoring the Pirates' lone goal in that semifinal, is the 2018 San Pedro Prep Girls Soccer Player Of The Year.

San Pedro junior midfielder Samantha Martinez had an electrifying campaign for the Pirates, as she scored 28 goals and distributed 14 assists. Martinez was simply unstoppable in league play, scoring five goals in a 10-0 victory at Banning of Wilmington on January 24, also scoring a game-winning goal against El Segundo on December 11 and the only legitimate goal in a 2-0 victory over South Gate in the second round of CIF-LACS Division 1 playoff competition.

Not to mention, Martinez impacted both of the Pirates' two league victories over rival Narbonne of Harbor City, scoring once in both victories while hustling on every play to keep potential scoring chances alive for others.

Senior goalie Carlene Luna also was spectacular down the stretch in just about every game she was out there for San Pedro, even getting a chance to score not once, but twice in a Marine League romp of Gardena on January 17. Luna's talent was just another weapon on a San Pedro team full of talent alongside Martinez, her sister and freshman Karina Martinez, sophomore midfielder Renee Ketner, sophomore forward Riley Cameron and another brilliant freshman midfielder Kylie Danelo.

One year removed from making history with a CIF-LACS Division 2 championship, Port Of Los Angeles (13-6-2 overall) attempted to create more history by leaping up to Division 1, but lost 2-1 in the second round to second-seeded Sotomayor of Los Angeles. In fact, the Polar Bears also was unable to win the Crosstown League for the first time after seven straight league crowns, as they were dethroned by upstart New West Charter of Westwood.

Mancilla added to her legacy in her final season by reaching the century mark, finishing with 110 career goals and 74 career assists, while Delgado, a Marymount California signee, set a school record for goals in a game with seven against Animo South Los Angeles on January 24.

POLA freshman defender and midfielder Sophia Alvarez had the most impactful year of all rookies, scoring 17 goals en route to being named SPNP Prep Girls Soccer 2018 Freshman Of The Year.