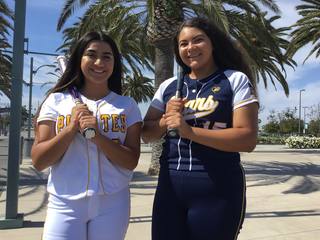 For the second year in a row, a San Pedro Prep Softball team made it to a CIF championship game.

In fact, two of the three teams reached the limit in 2018, as both San Pedro and Mary Star Of The Sea High ended two magnificent and improbable runs to reach a CIF-Los Angeles City Section Open Division final (San Pedro) and a CIF-Southern Section Division 6 final (Mary Star). The Pirates and Stars ended up second best in their respective divisions but made sure the sport of softball finished first once again as the most profound high school sport in San Pedro, California.

San Pedro High softball sophomore P/INF Briana Velazquez had a season most would dare to dream of having: a three-home run game against Narbonne on April 26, two game-winning home runs to sweep a doubleheader at Palos Verdes on March 20, including a walk-off two-run home run. Oh, she also managed to hit a walk-off grand slam to defeat nemesis Banning on May 2.

On the other end of town, Mary Star sophomore pitcher Alessandra Samperio was piling up stellar performances of her own to power the Stars to seemingly unreachable heights.

First, there's the two-hit shutout with 14 strikeouts to overpower fellow neighbor Port Of Los Angeles on March 1. Samperio would shut out powerful St. Anthony of Long Beach twice out of three meetings, all won by the Stars to take over the Camino Real League. And of course, there's the CIF-SS Division 6 semifinal upset of powerful Carnegie Schools of Riverside where Samperio allowed no earned runs with 13 strikeouts to knock out the top-seeded Wolverines that set the state record for runs in a single season.

It comes as no surprise that Velazquez and Samperio are the 2018 San Pedro News Pilot Prep Softball Players Of The Year with those kind of individual resumes.

Briana, the All-City Open Division & All-Marine League first team selection, was simply phenomenal at the plate for San Pedro, hitting ,453 with 12 home runs, 38 RBIs, 35 hits, five doubles and three triples, and after a sluggish start in the circle during the first month of the season, she managed a 10-7 record with a 3.36 ERA and 130 strikeouts. Samperio meanwhile went 20-7 with a 1.52 ERA and 274 strikeouts while also hitting .400 with two home runs, 25 RBIs, 30 hits and seven doubles en route to being named the Camino Real League Pitcher Of The Year.

In spite of their individual brilliances, both their respective teams benefited from them to have special seasons.

Left for dead at the end of March, San Pedro (19-15-1 overall) quickly regrouped by bringing back legendary coach Tony Dobra to finish the season as he retires as an English teacher, and that's when the Pirates took off. Senior catcher Anessa Quiroz, a Monroe College (New York) signee, also posted a season worthy of the highest honor in SPNP, as she hit .380 with nine home runs and 33 RBIs to be named the Most Outstanding Player.

The Pirates also had great seasons from Hope International University-bound senior OF/SS Taiya Reyna and sophomore infielder Brianna Talamantes, as they combined with Velazquez and Quiroz to hit 30 of San Pedro's 33 home runs, second highest total in program history. That magnificent four all made the All-Marine League team along with freshman third baseman Sierra Sandoval and senior pitcher Quincy Greenwood, who threw the only no-hitter in town on April 10 against Narbonne.

Mary Star (21-7 overall) had a near perfect record in Camino Real League play going 11-1, and won 12 games in a row before that streak ended with a 13-2 loss to Highland in the CIF-SS Division 6 finals on June 1.

All but one starter returns for head coach Hector Rivera in 2019, so we could see another uprising from the Stars.

Finally, Port Of Los Angeles (13-7) had the earliest exit of any team in their already rich history, as they were eliminated in the first round of the CIF-LACS Division 1 playoffs by eventual runner-up Venice, but still overcame the lack of a quality pitcher and a coaching change to start the season to still capture an eighth straight Coliseum League championship with a 12-2 mark, sharing it with King-Drew Medical of Los Angeles and CIF-LACS Division 2 champion View Park of Los Angeles.

Catcher Larissa Mercado emerged as one of the best in the freshmen class along with Sandoval, San Pedro's Kirstin Sanchez and Jo Jo Krause, and Mary Star outfielders Ella Orozco, Arianna Bautista and Lexi Buscemi.

All three teams return a boatload of talent for 2019. There is truly something special in the air for San Pedro Prep Softball as the future is bright.