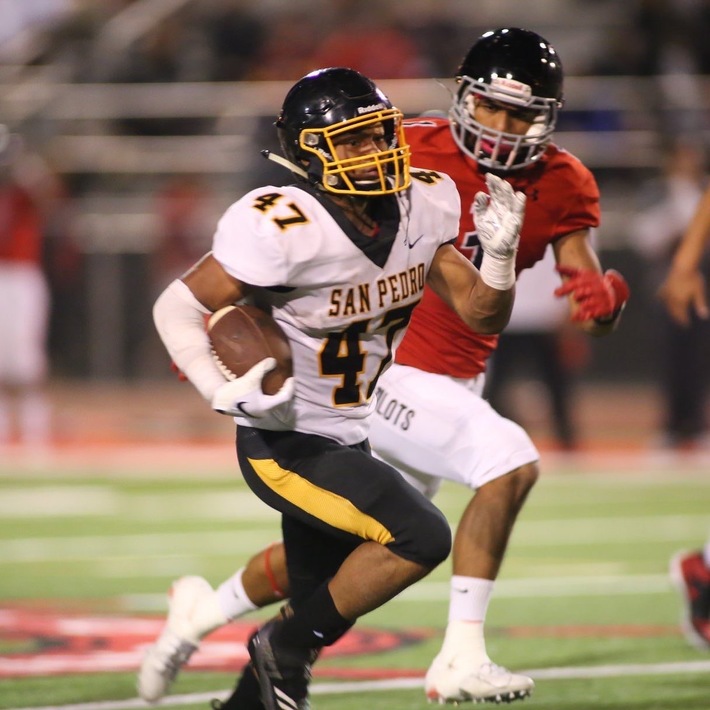 Offensively Ward rushed for 1,061 yards and 19 touchdowns on 124 carries, an 8.6 yards per carry average, also catching 19 passes for 158 yards and another touchdown, defensively picking up a team-high 106 tackles to go along with four sacks, two interceptions (one TD), three forced fumbles and three fumble recoveries, also returning a kickoff 99 yards for a touchdown against Taft of Woodland Hills on September 6.

Meanwhile, Mary Star (9-3 overall, 2-1 league) was able to pick up a share of the Camino Real League crown in the season finale on November 1 when it won 28-26 at rival Bishop Montgomery of Torrance, coupled with St. Monica's 48-19 victory over fellow co-champion Cantwell Sacred Heart of Montebello.

The attack method of the Stars was nothing short of methodical, as they pounded away at teams with the tried and true run-oriented Double Wing-T offense, grinding out 4,272 rushing yards and 54 touchdowns, averaging a robust 356 yards on the ground. The two main catalysts are the SPNP Prep Football Offensive Player Of The Year in senior running back Aaron Martinez (1,463 rush yards, 21 touchdowns, 138 carries, 10.6 avg.), and the two-time Camino Real League & SPNP Prep Football Lineman Of The Year, senior OL/DL Jesse Tello.

Another player that had a wonderful season in town was San Pedro junior quarterback Dylan Kordic, who threw for 1,301 yards and 11 touchdowns in capturing All-Marine League first team and All-City Open Division second team offensive honors.

PLAYER OF THE YEAR: Ward.

OFFENSIVE PLAYER OF THE YEAR: Martinez.

DEFENSIVE PLAYER OF THE YEAR: Lopez-Rosales.

LINEMAN OF THE YEAR: Tello.

NEWCOMER OF THE YEAR: Sarmiento.