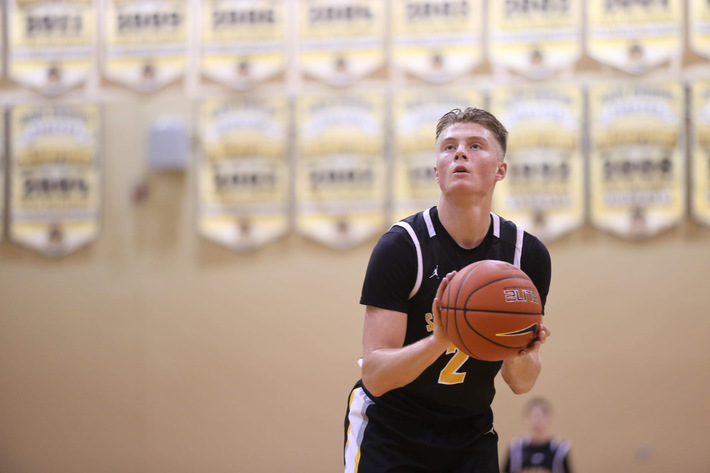 The 2019-2020 season didn't get to fully finish in high school basketball all all CIF State championships planned for last Saturday at the Golden 1 Center in Sacramento was abruptly cancelled due to the growing concerns of the recent coronavirus (COVID-19) outbreak. However, the San Pedro Prep Boys Basketball seasons ended for San Pedro, Mary Star Of The Sea and Port Of Los Angeles High Schools a month before with trio first-round playoff exits.

For the first time since the 2013-2014 season, San Pedro High had the most wins of all three schools in the 2019-2020 season, as they finished 18-11 overall, and third place in the Marine League with a 6-4 finish before bowing out in the first round of the CIF-Los Angeles City Section Division 2 playoffs with a 63-57 home loss to Garfield on February 14.

Senior forward Ian Hietala was a sensational force for the Pirates, as the All-Marine League first team guard averaged 18.7 points, 5.5 rebounds and 3.2 assists, showing amazing touch on tough fadeaway jumpers, and a killer touch from beyond the three-point line. As a result of his incredible senior campaign, Hietala is your 2020 San Pedro News Pilot Prep Boys Basketball Player Of The Year.

Meanwhile over at Mary Star, competition in the Santa Fe League got a whole lot tougher as they fell to third place, putting an end to their two-year reign of sharing the league title. The two teams that finished ahead of them, league champion Salesian of Los Angeles, and runner-up St. Pius X/St. Matthias Academy of Downey, both won CIF-Southern Section championships in their respective divisions.

Even though the Stars finished 13-14 overall and 6-4 in league, they made it pretty tough on No.2 seed Westlake of Westlake Village in a 55-52 loss in the opening round of the CIF-SS Division 3-AA playoffs, as senior guard Aaron Martinez narrowly missed a potential game-tying three-pointer at the buzzer. In that same game, San Pedro News Pilot Prep Boys Basketball Most Outstanding Player, senior guard Adrian Alvarez scored a career-high 37 points, nailing six three-pointers. Alvarez averaged 17 points a game and had six games where he made six threes in a game.

Port Of Los Angeles became the closest to any of the three schools in pursuit of a league crown, finishing in a tie for second place in the Imperial League with eventual CIF-LACS Division 5 champion Dymally of Los Angeles, as Jordan of Los Angeles took home the league crown.

Third-year coach Spencer Schultte guided the Polar Bears to a 9-11 record and 6-4 in league play before falling in overtime, 69-65 to Animo Robinson of Los Angeles at Peck Park in the first round of the CIF-LACS Division 4 playoffs. The record itself is misleading due to not playing with a full team until January due to eligibility problems and injuries, but thanks to the late turnaround by the Polar Bears, Schullte is the 2020 San Pedro News Pilot Prep Boys Basketball Coach Of The Year.

In all, this was the second year in a row that all three hometown high schools reached the postseason together, so it was still a wonderful 2019-2020 season.