Uncommon Location for a Common Dolphin

I had an unusual encounter while conducting my weekly Cabrillo Beach bird survey for the Cabrillo Marine Aquarium on Thursday (June 9, 2011); there was a single dolphin inside the harbor, near the fishing pier. That is kind of unusual but not unheard of. Dolphins are quite easily seen off our coast, on any given day if you scan the water long enough you have an excellent chance of seeing dolphins of one of several different species that call the Southern California Bight home, but they don’t come into the harbor very often. 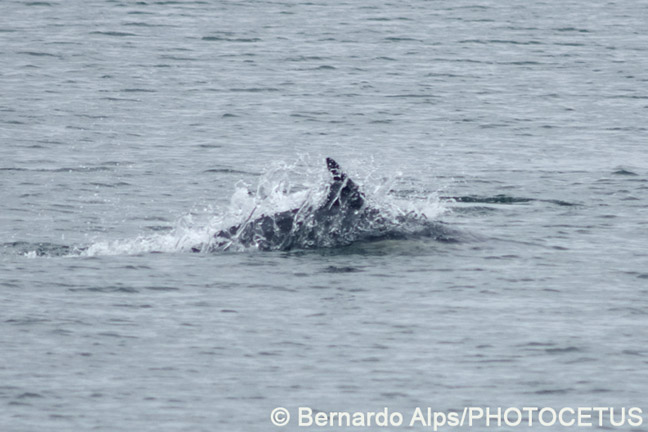 I automatically assumed that it was a bottlenose dolphin (Tursiops truncatus), a species that lives very close to shore, often frequents Cabrillo Beach and is seen inside the harbor on occasion. The dolphin was moving around in the area between the end of the fishing pier and the first bend in the breakwater. It was surfacing at irregular intervals and changing speed and direction frequently. It took me a while to realize that it didn’t look quite right for bottlenose dolphin. It was small and the dorsal fin was shorter and narrower. When it came out of the water little higher I could see the tan hourglass pattern on its side; it was a common dolphin, likely a long-beaked common dolphin (Delphinus capensis).

Common dolphins are very abundant off our coast, but they don’t often come too close to shore and they rarely come into the harbor. They live in pods of several hundred or even thousands. We most often see them in groups of 300 to 500 animals, and a group of approximately 7000 has been recorded in the San Pedro Channel. It is very unusual to find an individual by itself. A couple of years ago, a female long-beaked common dolphin with a calf spent a few weeks in Monterey Harbor, but that kind of behavior is the exception rather than the norm.

The dolphin’s swimming pattern indicated that it might be feeding. It was accompanied by a year-old California sea lion. The two often surfaced almost simultaneously and often within a few feet of each other. Sea lions often feed with dolphins, but they also interact with many species of marine mammals in a playful manner.

While this was going on, I noticed a pod of about 400 common dolphins make their way east about a half mile outside the breakwater and then turn southeast. The dolphins did not appear to be feeding since no birds were accompanying them but they were in no hurry with small groups doubling back and then continuing on. It could very well have been our dolphin’s pod.

Time will tell if our dolphin will remain in the harbor, but most likely it was just a scout exploring a potential feeding area. When common dolphins search for prey they fan out over a wide patch of ocean, often several miles apart, but they usually stay in small groups. 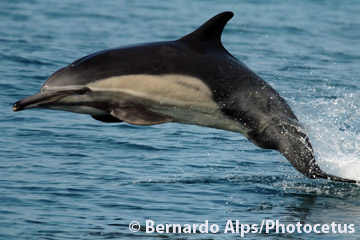 Unfortunately the dolphin and the sea lion were somewhat far from where I was most of the time and surfacing erratically under heavy clouds; conditions that didn’t make for good photos. I am including this photo of a long-beaked common dolphin taken out in the channel a couple of years ago that shows what this species looks like.

Comment by Bernardo Alps on June 16, 2011 at 8:20am
A lone common dolphin, likely a long-beaked common dolphin, was recently discovered in Southern Puget Sound near Olympia, WA. The animal has unusual algal growth all over its body. The location is well outside of the range of the species. Scientists form the Cascadia Research Collective are monitoring the animal.