As we quickly threw on some clothes, visions danced through my head of an animal so badly decomposed as be unrecognizable. But we needed to see for ourselves. The parking attendant directed us to the animal and informed us that it had been there probably since Saturday afternoon.  “Just look for the large flock of gulls,” he said. As soon as we got out of the car at the bottom of the cliffs, we spotted the animal washed up on the rocks. It was MUCH larger than a sea lion. As matter of fact, it was an adult humpback whale (Megaptera novaeangliae) and those guys get to be 50 feet long. We soon realized that it was not a whole humpback; the head and chest area, including the long pectoral fins were missing. It was as if about a third of the whale had been sliced cleanly off with a huge sharp blade. Like the propeller from a large ship. 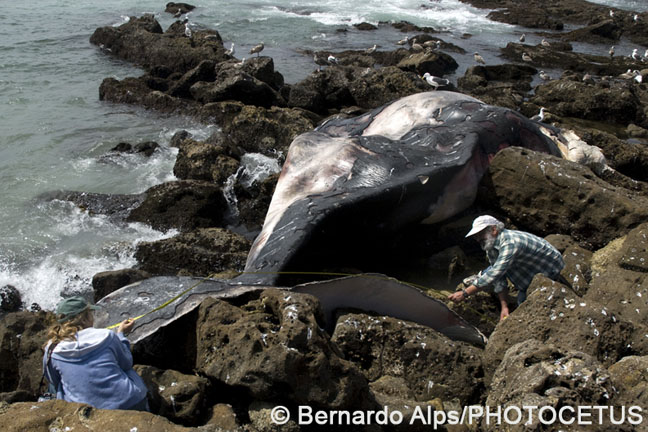 I immediately called Dave Janiger, curatorial assistant at the Natural History Museum of Los Angeles County and the person responsible to respond to dead stranded marine mammals in the area.  He arrived very quickly with his wife, marine biologist Alisa Schulman-Janiger, and soon delivered his verdict: ship strike. The crushed ribs and mangled vertebral column clearly indicated that the whale had been hit at high speed by something large and blunt, most likely the bulbous bow of a large ship. Then it probably was sucked in by the propeller and the front third of the animal was sliced off.

The whale was still fairly fresh, Janiger estimated that it had been killed between three and five days ago. It didn’t smell yet and the much of the skin was still in good condition. At least one of the barnacles attached to the whale’s tail fluke was still alive. It was not difficult to identify it as a humpback whale; it had the very distinctive scalloped edges to the tails flukes, the knobby dorsal fin, black and white skin and thick throat grooves. The genital area was wedged between rocks, but the absence of mammary slits makes me tentatively sex it as a male. We will know for sure in a few weeks, when the lab results become available for the tissue samples that Janiger collected. That means he cut off small pieces of skin and blubber and some barnacles. 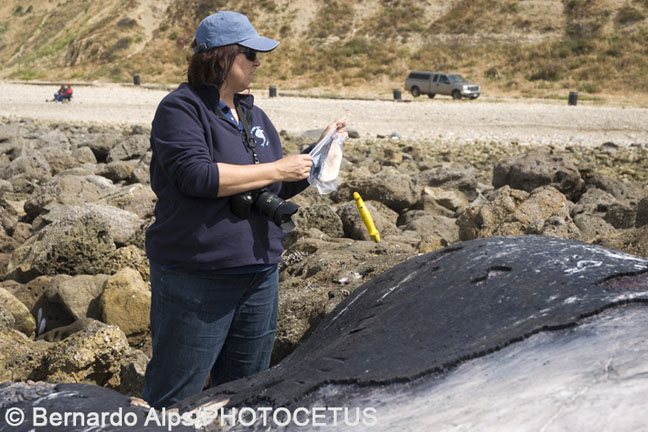 A population of 1,400 to 1,700 humpback whales feeds off the California coast every summer, usually arriving from their Central American wintering grounds in March and April. Right now dozens of these majestic animals are delighting whale watchers in the Santa Barbara Channel with their playful behaviors and occasional friendly approaches to whale watching boats.

And that is where it all comes together. The humpback feeding grounds are transected by the shipping lanes that lead to the bustling Los Angeles/Long Beach port complex. The timing and distance are about right: the prevailing currents would carry a dead whale down the coast until it finally washes up days later and miles away. Efforts are underway to slow down the large cargo ships in the biologically sensitive Santa Barbara Channel, especially since at least four endangered blue whales were killed in the area in 2007. At this point speed restrictions are voluntary and ships are only advised to reduce their speed when blue whales are spotted in the shipping lanes. 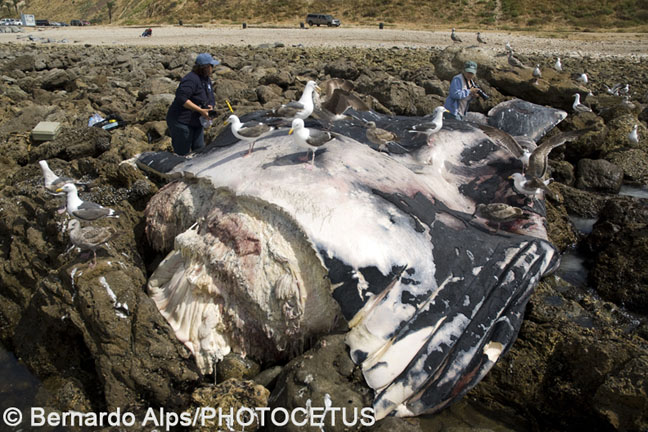 While whales have excellent hearing and are usually acutely aware of everything in their environment, it is believed that the design of large cargo ships prevents the engine and propeller sound to propagate directly ahead of a moving vessel. Scientists like John Calambokidis of the Cascadia Research collective have been studying the whales’ behavior around large ships and are making some worrisome discoveries. The large whales, who aren’t really wired to fear much in the ocean, come to the surface when startled, which pits them right in the danger zone.

Nobody knows for sure how many whales are killed by ships each year. We only get to see the ones that stay attached to the ships that kill them and are brought into port or the ones that wash ashore, but there are likely many, many more that sink or drift out to sea and are never found.

So far there are no plans to dispose of the dead humpback at White’s Point, it can be easily seen from the top of the bluff near the playground. 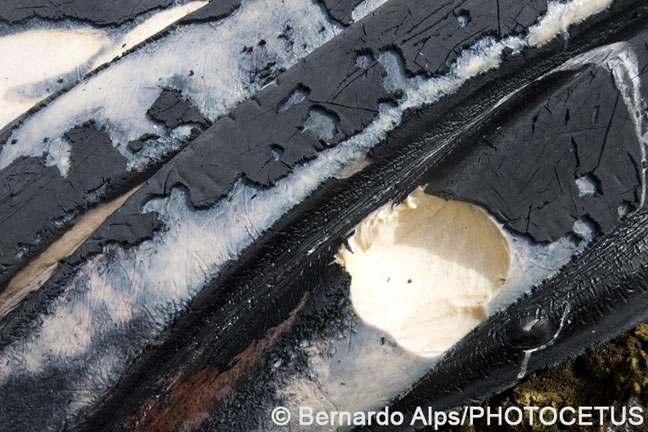 Comment by Bernardo Alps on May 9, 2011 at 2:41pm
Thanks, Eddie. White's Point or White Point, there is no agreement on the name, is at the end of Western Avenue where it meets Paseo Del Mar. The whale is roughly in the center of this image at the very bottom. http://www.californiacoastline.org/cgi-bin/image.cgi?image=20040637...

There is a musky scent in the air from the whale's oil, but it is nothing compared to the stench that will develop if the whale remains ashore. Which brings us to your second question. White's Point is owned by Los Angeles County; that makes the county responsible for the whale. It will be pretty costly to hire a large vessel to pull the carcass off the rocks at high tide and tow it out to sea. And then hope that it strands again in an isolated area; talk about kicking the can down the road. Leaving it where it is would have some residents very upset pretty soon. Stay tuned, we'll follow the saga of the dead humpback that nobody wants.